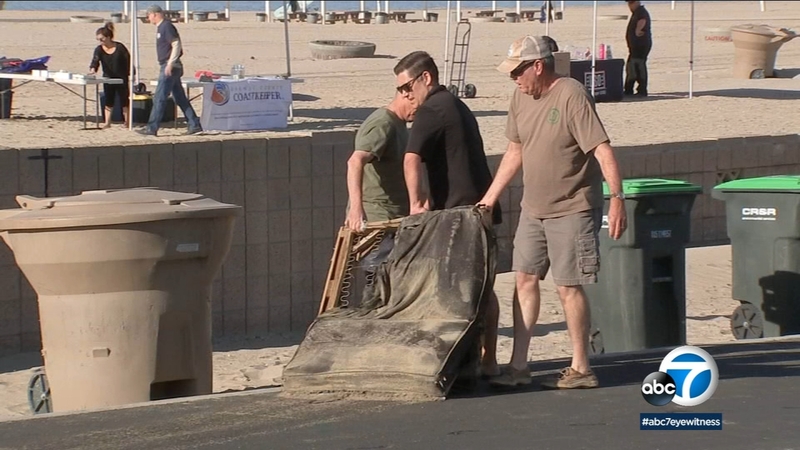 HUNTINGTON BEACH, Calif. (KABC) -- Volunteers in Huntington Beach teamed up to clean up some of the mess left behind by the recent SoCal storms, and they also gave back to Coast Guard members impacted by the government shutdown.

Victoria Dina, 9, says she loves Huntington State Beach. She's one of dozens of volunteers who spent her Saturday morning picking up trash that could have ended up harming wildlife.

"They can float to the ocean, and the animals think that it's food or something, and they could swallow it and get stuck in their throat," Victoria explained.

Orange County Coastkeeper's beach cleanup director Patrick Irizarry says the recent rains swept a lot of garbage onto the Southland's beaches, but he says humans are a big part of the problem.

"We create a lot of trash, and it not always ends up in a trash bin -- or landfills overflow -- and they get into storm drains," he said.

The team effort was more than just a beach cleanup, it was also a way to give back to Coast Guard members and their families who were affected by the government shutdown.

Maureen Ahrens is the Orange County manager at Bob Hope USO, which helped put on the event. Because Coast Guard members continued to work during the shutdown, Ahrens says they and their families need support in the form of gift cards and basic necessities.

"They need to know that as Americans, as people, we support them," she said.

Ahrens says the cost of needed supplies can easily pile up when one has gone without a paycheck for a month.

And it's still not clear exactly when Coast Guard members will be paid for their work protecting waterways and performing search-and-rescue operations.

"They're out there every day for us, and they're not getting paid," she said. "How many of us wouldn't go to work if we weren't getting paid?"
Report a correction or typo
Related topics:
community & eventshuntington beachorange countybeachescoast guardsocietyvolunteerism
Copyright © 2022 KABC Television, LLC. All rights reserved.
TOP STORIES
Man accused of fatally stabbing UCLA grad student arrested
Biden, 1 year in, says nation weary from COVID but in a better place
Family seeks justice for teen found dead along freeway in South LA
Starbucks no longer requiring US workers to be vaccinated
Cardi B offers to pay for funerals of all 17 Bronx fire victims
French actor Gaspard Ulliel dies after ski accident
Vice President Kamala Harris to visit San Bernardino on Friday
Show More
'Weird Al' biopic to star Daniel Radcliffe in title role
Man sentenced to life in prison for violent crime spree in LA County
Felony charges are 1st in a fatal crash involving Autopilot
COVID test sites open in Hawthorne, San Gabriel Valley to meet demand
Northern California teen nails perfect SAT score
More TOP STORIES News