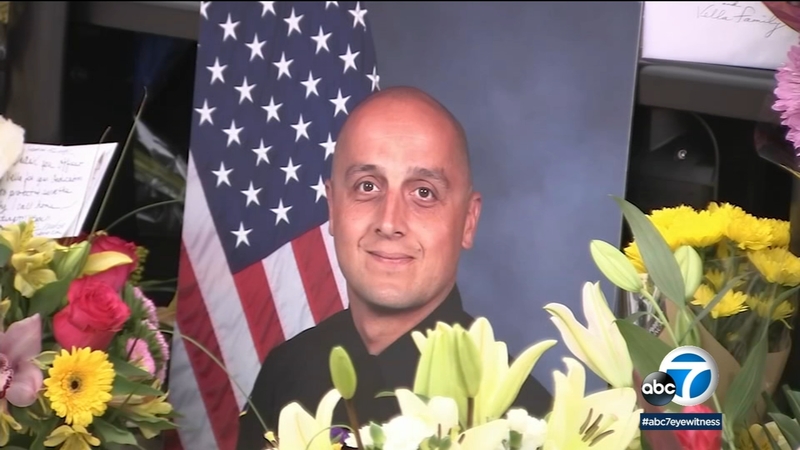 HUNTINGTON BEACH, Calif (KABC) -- Outside the Huntington Beach Police Department, a police vehicle parked in front of police headquarters is nearly covered with flowers from residents that have come by to pay their respects to officer Nicholas Vella.

Vella, a 14-year veteran of the department, died from injuries he suffered when the helicopter he was in crashed in Newport Beach. A second crewmember survived the crash, and was released from the hospital on Monday.

"Who protects my family? First responders, policemen and firemen both," Huntington Beach resident Bill Godfrey said. "So I pray for their safety, and their families' safety,"

Vella and the pilot were responding to a disturbance call in neighboring Newport Beach at about 6:30 p.m. on Feb. 19, when surveillance video from a home captured the helicopter crashing into the frigid water.

Authorities on Monday continued their investigation into the cause of a police helicopter crash along the Newport Beach coast that killed one officer and sent another to the hospital with critical injuries.

According to the National Transportation Safety Board, the federal agency that investigates aircraft crashes, the pilot reported mechanical problems moments before the chopper crashed into the water. The NTSB has taken possession of the helicopter, and could take up to a year before releasing their findings on the exact cause of the accident

We wanted to inform everyone that the second officer involved in last night’s crash has since been released from the hospital.

Thank you to our HB community & law enforcement family for the love & support you continue to show Officer Vella’s family & our Department. pic.twitter.com/sTmGarGts6

Officers from other departments have come to the memorial to pay their respects to officer Vella.

"I would have driven the car for an extra two hours if I had to," Glendale police officer Edgar Zabunyan said. "This is a time where the law enforcement community should come together. We're going through some rough times. This was a very unfortunate incident that just kind of added on top of everything."

Many who knew Vella took to social media to express their grief.

Officer Nicholas Vella was 44 years old. He leaves behind a wife and daughter.

"Nick Vella was my brother in every sense of the term brother," brother-in-law Randy Tovar said. "I loved him. He has been plucked from life at the young age of 44 years old. He was a really good man."

At the growing memorial outside police headquarters, many of those who came by to pay their respects didn't know officer Vella, but they appreciated what he did for the city of Huntington Beach.

"It was very painful for me," Virginia Haynes said. "My son is a firefighter in Huntington Beach. The guys in the helicopter keeps us safe. They fly over just to keep an eye on things, and I respect the police department here very, very much"

Officer Vella served our community with honor & dignity. The display of love & appreciation we have seen over the last 24 hours has been overwhelming but fitting for someone as great as Nick. We continue to thank everyone for their kindness as we mourn the loss of our brother. pic.twitter.com/tDtTmL5tpy