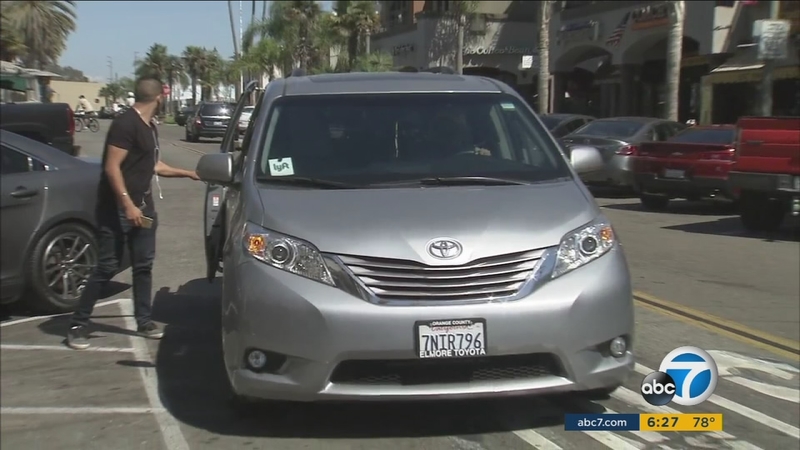 HUNTINGTON BEACH, Calif. (KABC) -- Huntington Beach police said more people are making the right choice not to drink and drive, but now Uber and Lyft drivers who stop in the middle of a popular road are causing a safety hazard.

Authorities said the ride-share company drivers stop in the middle of Main Street, a hot spot with bars and restaurants, to pick up or drop off passengers and that forces drivers to go around them.

"On a two-lane road sometimes it causes problems because it can go head-on with other traffic," said Huntington Beach Police Officer Jennifer Marlatt.

Police plan to hand out information fliers starting this weekend, letting ride-share drivers know about nearby designated loading zones and turnouts where they can drop off and pick up passengers. Drivers would have to inform passengers.

"We're hoping that the Uber or Lyft drivers - the ride-share drivers - will make contact with them and advise them where to go where they can be picked up," Marlatt said.

But people who use the ride-share companies said it's not that big of a problem.

"I think it's ridiculous because first off, people are going to get irritated they have to walk that far drunk, especially in the middle of the night," Huntington Beach resident Kal Hassan said. He added that he uses Uber or Lyft every weekend.

Police said drivers who block traffic could receive citations, with fees and fines adding up to more than $300. Some complain it's a money grab for authorities.

But police said it comes down to safety.

"The patrons they're picking up are often times intoxicated and, without paying attention, they will run across the road trying to get to the Uber driver," Marlatt said.

So far, Eyewitness News has not received a comment from Lyft, but Uber said it plans to reach out to Huntington Beach police to see how the company can help.

Police said they're just warning drivers for now, but they'll start issuing citations at the end of October.

The designated spots for ride-share users and drivers for pick up and drop off in downtown Huntington Beach are either yellow loading zones or turnouts.

Some of those are located at the following: