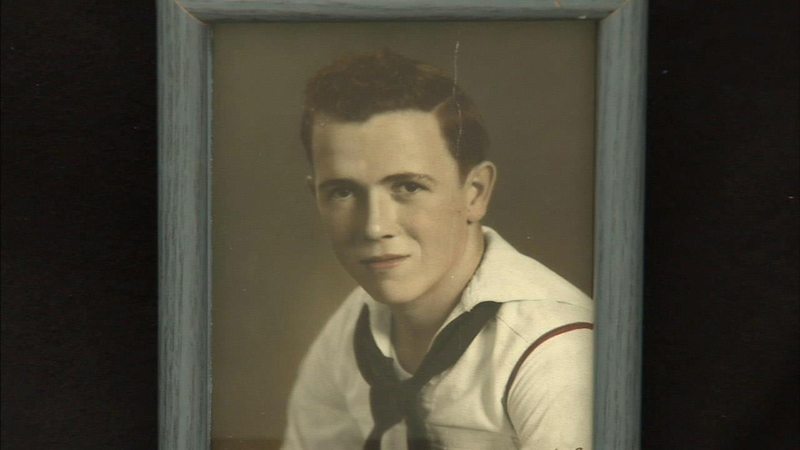 HUNTINGTON BEACH, Calif. (KABC) -- He was 17 years old and smitten. Ardenne Allen Woodward, known as Bill, was a Huntington Beach seaman who poured out his heart in letters to his new wife and the baby girl he would never meet.

"My mom told me that I had a real daddy and that he died in the war, and that a big bomb went down the smoke stack of his ship," Richardson said.

Woodward's ship was the USS Arizona, which sunk at Pearl Harbor. For seven decades, the city of Huntington Beach did not know Woodward's name or his connection to the beach town.

That was until the city's historian, Jerry Person, came across an old issue of Life magazine at a garage sale. In it, Person found a mind-boggling roster, which listed the nearly 2,400 Americans who were killed on the "Day of Infamy," and there was Woodward -- a name Person realized was missing from the Huntington Beach War Memorial.

"He wasn't on that list there and he should be recognized," Person said.

City leaders, including Huntington Beach Councilman Dave Sullivan, became determined to honor Woodward and let residents know what he did for them.

It took a year to find Richardson and lay out their plans to add her father's name to the memorial.

"I just immediately said, 'Oh, yes please and anything I can do, and I am just very excited,'" Richardson said.

On Monday, for the first time, Woodward's name was announced as one of Huntington Beach's own. On June 9, a separate ceremony will reveal his name newly engraved on the city's memorial.