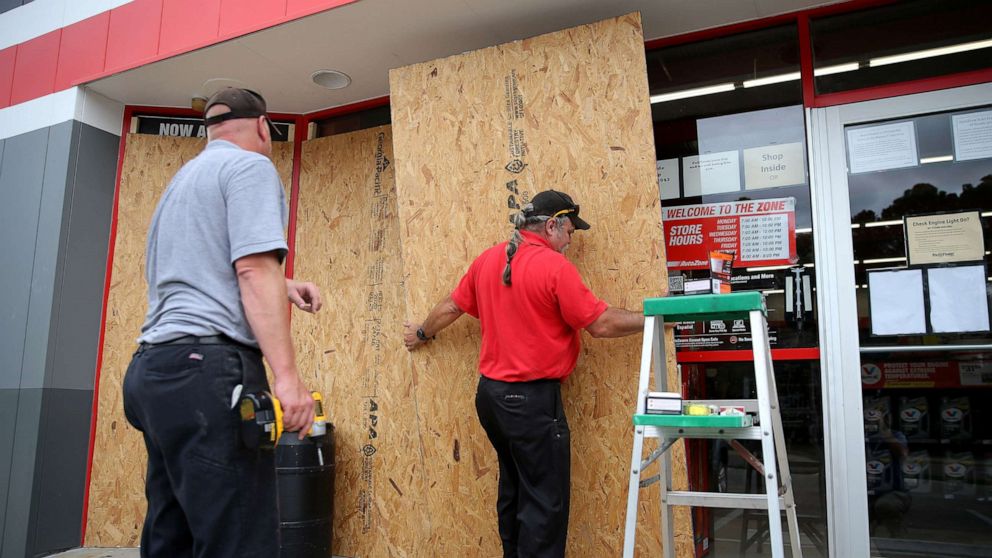 Life-threatening storm surge is expected in some areas when Hurricane Sally strikes the Gulf Coast late Tuesday into Wednesday morning.

Life-threatening flash flooding is also likely, with the highest rainfall totals expected to be along the Mississippi and Alabama coastline.

Sally strengthened into a Category 2 storm on Monday as four other storms rocked the Atlantic.

As of late Monday night, Sally was located 90 miles east of the mouth of the Mississippi River and was traveling west-northwest at 3 mph with sustained winds of up to 100 mph.

The current forecast has the storm making landfall along the Mississippi/Alabama border sometime overnight Tuesday into early Wednesday.

Sally is the seventh hurricane to form this season. A storm surge of up to 11 feet and rain up to 24 inches is expected to hit the Gulf Coast over the next 24 to 36 hours, according to the forecast.

Sally is one of five tropical storms that are simultaneously moving through the Atlantic Ocean, an event that has not taken place in almost 50 years. A tropical wave is over the Gulf of Mexico, while Hurricane Paulette and Tropical Storms Rene, Teddy and Vicky are out further in the Atlantic Ocean.

Storm surge remains a big threat as Sally makes landfall. Because of its slow speed, more water could pile up in the bays and inlets along the Gulf Coast.

Hurricane warnings have been issued across eastern Louisiana, coastal Mississippi and Alabama, and the Florida Panhandle. New Orleans, Biloxi, and Mobile are included in these warnings.

Flash flood watches extend as far north as Birmingham, Alabama, as Sally is expected to move slowly across the state through Wednesday with heavy rain.

Alabama Gov. Kay Ivey has issued a state of emergency, saying, "bad weather is nothing to take lightly."

Biloxi Mayor Andrew Gilich ordered all casinos to close and urged residents to prepare for the storm.

"Please take action. Secure your property. Know that low-lying areas will see flooding, and we may have an interruption in power as the winds pick up. This is not our first rodeo, but residents need to have a plan and follow that plan," Gilich said in a statement.

Storm surge warnings are in effect for Port Fourchon, Louisiana, to the Florida panhandle, Lake Pontchartrain, Lake Maurepas and Lake Borgne, as well as Mobile Bay.

Texas Gov. Greg Abbott has deployed the Texas A&M Task Force 1 to Louisiana at the request of FEMA in preparation for Sally.

Flooding from rainfall is another major threat with Sally because of its slow speed, and some areas could see 15 to 20 inches of rain in the next several days.

Elsewhere, Hurricane Paulette hit Bermuda and is moving away from the island, leaving behind strong winds and torrential rain.

The hurricane is expected to head east and not make further landfall.

Elsewhere in the tropics, there is a new tropical storm, Teddy, which is forecast to become a major hurricane by this weekend.

The storm is moving in the general direction of Bermuda, but it is too early to say if Bermuda will get hit again.

Additionally, Tropical Storm Vicky has formed in the eastern Atlantic, becoming the 20th named storm of the 2020 hurricane season. That storm is currently in open ocean and not threatening any major landmass.