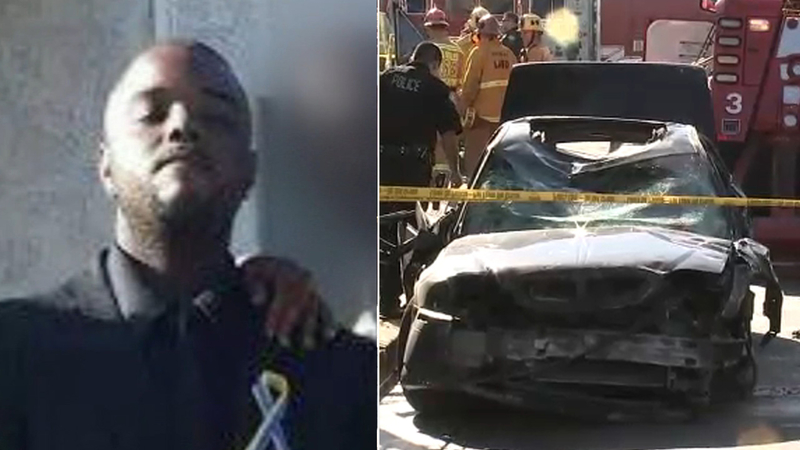 HYDE PARK, LOS ANGELES (KABC) -- A young couple was killed after their vehicle rolled over and crashed into a building in Hyde Park Sunday morning.

Authorities said the crash happened around 9:13 a.m. in the 3300 block of West 66th Place. The black Lincoln LS sedan ended up rolling over and crashing into a vacant store, causing the single-story structure to partially collapse.

The vehicle also took out the building's front awning, sheared a hydrant and knocked down a street light.

Two people, a male driver and female passenger, were partially ejected through the sun roof and window and pronounced dead at the scene. Authorities said neither was wearing a seat belt.

The car was traveling northbound on Crenshaw Boulevard when it lost control, investigators said.

"After he hit the hydrant and the pole, it flipped on its side, landed right onto that building, where both the driver and passenger ejected the vehicle," explained LAPD Officer Augustine Orozco.

Heartbroken family members later identified the driver as 27-year-old Christopher Giles. Loved ones like Tyree Waddles are now mourning the sudden deaths of Giles, his cousin, and Giles' girlfriend.

"He was a real hard worker, dedicated family man. He was really, really tied into his family, man. He went all out for everybody around him," Waddles said.

Waddles explained that Giles had just picked up his girlfriend at work, and they were on their way home when the crash happened.

Investigators said speeding may have been a factor in the crash. They said the area is a notorious stretch of road that is known for high speeds.