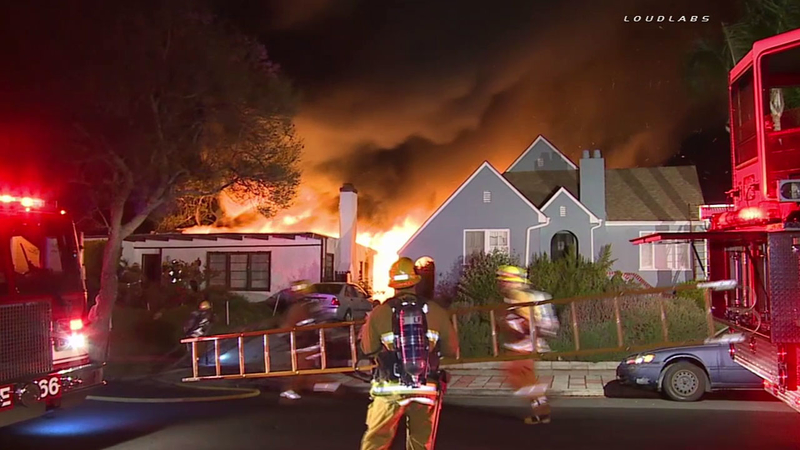 HYDE PARK, LOS ANGELES (KABC) -- An 80-year-old man jumped from the roof of his home during an early-morning fire that left his wife and 50-year-old son dead, fire officials said.

The blaze erupted at a two-story home in the 4200 block of W. 62nd Street around 1:40 a.m., according to the Los Angeles Fire Department. Authorities said the mother ended up trapped inside and both her husband and son ran back inside to rescue her.

The elderly man was able to escape from the roof, but his son and wife did not make it out.

When fire units arrived, they encountered flames shooting into the air and smoke billowing out of the roof.

Fire officials said it took 78 firefighters about 49 minutes to knock down the blaze.

The surviving victim was transported to a local hospital with minor injuries.

Laura Deyarmin lives directly next door to the victims and says she's devastated just thinking about her neighbors.

"The older couple owns the house, and she was kind of in ill health the last few years, but every time you'd see them, we'd always catch up, talking about our families," she said. "They were like the house where all their family gathered, kids, grand kids, aunts, uncles and it's just devastating."

Investigators said the blaze appeared to have started on the first floor and then quickly spread through the house.