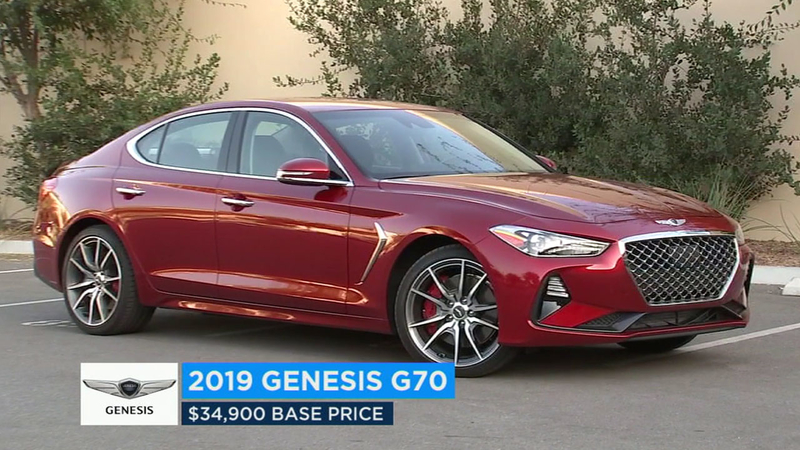 The G90 sedan is a fitting flagship for the relatively new Genesis brand.

It's large, roomy, and brimming with luxury. The luxurious interior is very accommodating, not just for the driver, but for the passengers as well.

But premium auto brands need more than large sedans to be successful. So in order to grow, Genesis is thinking smaller.

Just arriving in showrooms is the new G70. It's a sport sedan, and a luxury sedan. The first new-from-scratch vehicle for the Genesis brand, it starts at about $35,000, and is meant to compete with established competitors like the BMW 3 series and Audi A4.

And the G70 seems to have the goods to succeed. There's decent power from a turbocharged 2.0-liter four cylinder engine (252 horsepower), or substantial power from a 3.3-liter twin-turbo V6 (365 horsepower).

The interior is luxurious enough, and the chassis was tuned on high-speed roads and test tracks in Europe. And most importantly to car enthusiasts, the G70 is rear-wheel drive.

And to further please enthusiasts, Genesis is offering the G70 with a 6-speed manual transmission on the base engine. That's become even more significant since BMW announced that their next-generation 3 series - due out next spring - will NOT offer a manual gearbox for the first time ever. On that line of the spec sheet, it would appear to be advantage: Genesis.

The relatively new brand's sedan lineup would appear to be complete. (Genesis is the upscale division of Hyundai.) The big G90 sits on top, then there's the mid-size G80, and now the trimmer G70.

But what Genesis really needs is some kind of crossover SUV. Or really, two of them in different sizes to match offerings from the brands they compete with. The SUV is coming, says Genesis, though nothing has been officially announced. They have shown some concept vehicles, notably with plug-in hybrid power.