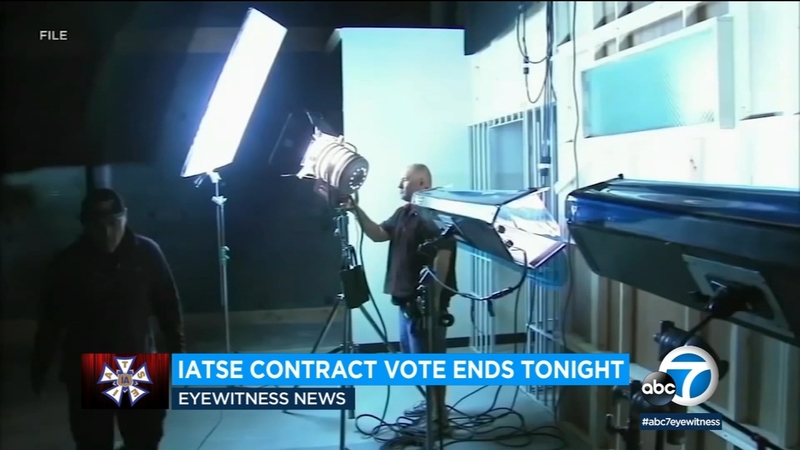 LOS ANGELES (KABC) -- Voting ends Sunday for members of a film and television union on a proposed contract with producers that was reached last month, just as the workers were prepared to go on strike.

The tentative three-year agreement with the International Alliance of Theatrical State Employees (IATSE) includes wage increases and provisions for rest periods and meal breaks, but some union members are not happy with it, and are vowing to vote "no."

Voting began Friday and polls close at 8:59 p.m. Sunday. Online voting will cover a pair of contract proposals -- the basic agreement and an area standards agreement applying largely to workers outside the Los Angeles area.

The tentative main contract reached in October averted a strike that would've crippled the industry. It includes a 3% pay increase, new protections for meal breaks and rest periods, which would put an end to so-called "Fraturdays," a work period spanning from Friday to Saturday that workers say doesn't allow them enough rest.

Film and TV workers believe the vote to ratify a proposed contract with producers will be a close one.

"You now have the opportunity to vote on the new terms of your contract," Union President Matthew Loeb wrote to members in a letter posted on the union's website last week. "I recommend you carefully review the information on the new agreement and vote in favor of its ratification."

However, some union members say it does not sufficiently improve working conditions, particularly in regard to long hours and on-set safety.

IATSE member Cory Boldroff says the "no" vote is silenced as it's hard to reach out to every single union member to hear others' grievances. Some members have put together local town halls to explain why they're against the current proposed contract.

"When you hear their stories, it's eye-opening, it's tear-jerking and I don't believe anyone that has listened to these recordings could actually in good conscience vote yes on this contract because a grievance on one of us is a grievance on all," he said.

The results of the vote are expected to be announced Monday.