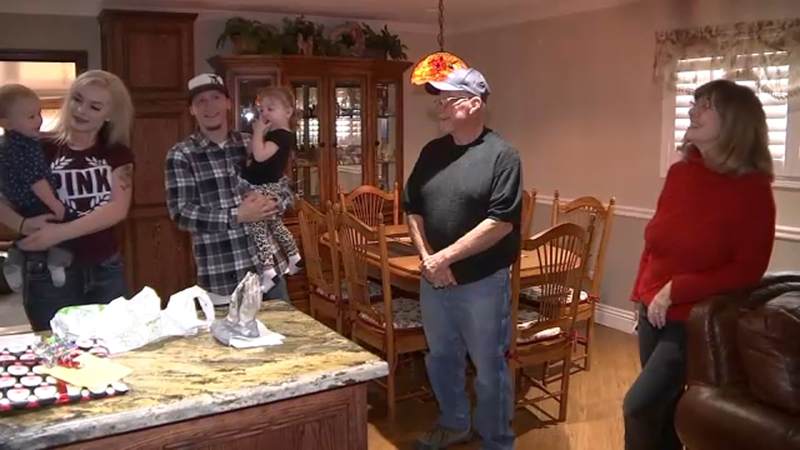 JURUPA VALLEY, Calif. (KABC) -- After one Northern California family lost their house in the massive Camp Fire, Daniel and Autumn Salazar, along with their two children, have a new place to call home - thanks to the kindness of a Jurupa Valley couple.

"It's still a lot of a change," Autumn said. "But this home is beautiful."

Their story started on Nov. 8, 2018, when the Camp fire broke out near the Butte County town of Paradise. It would later become the deadliest and most destructive fire in California history.

"It looked like a warzone," Daniel shared. "There was fire everywhere."

Butte County Sheriff's Deputy Aaron Parmley thought he was capturing the last moments of his life.

The Salazars had barely enough time to grab some clothes and other belongings from their Paradise home and evacuate the town. But while they would escape with their lives, at least 85 people would not, including Daniel's grandparents.

He clearly remembers what the coroner told him over the phone.

"'Your grandparents didn't make it out of there,'" Daniel recalled.

Their lives turned upside down. The Salazars said it seemed like forever before they were allowed back home to Paradise. When they returned, they discovered their entire home was destroyed.

They only found two things in the rubble: a wrench and a ceramic statue of two hands clasped together in prayer.

"That's what we saw, was praying hands straight up on the metal frame of our house," Daniel said.

Perhaps it was a symbol of prayers that would soon be answered; but not anywhere they'd ever been before.

A family returned home after being forced to evacuate from the Camp Fire's flames to find their dog watching over their property.

Jurupa Valley is 500 miles away. That's where a couple had decided to offer their home to a family that was displaced by the fire.

"You've got to step up and give back," said Mike Zangara. "For all the good people have done to us... that's the way we should all be."

Mike and Ruth Zangara spend five days a week in a small apartment in downtown Los Angeles, allowing them to be closer to work. For the past several months, they were only living in their Jurupa Valley home on the weekends.

"God has been good to us," said Ruth. "It would be a shame to have it sit empty all week."


The Zangaras posted an offer to lend their home to a family in need on Facebook. Although more than 1,000 families responded to the offer, they chose the Salazars, partly because they were such a young family. The Chico Police Department got involved to verify that the Zangaras' offer was serious.

The Salazars laughed as soon as they started getting close to Southern California, joking, "We're not used to that much traffic."

The Zangaras said the Salazar family will be able to call the Jurupa Valley property home for one year -- rent free. They're only responsible for the utilities. The Zangaras will still handle the mortgage and property taxes.

"It's about stepping up," said Mike. "We just wanted to be open to somebody."

The Salazars are still trying to process everything they've been through. Daniel is still mourning the loss of his grandparents, but the couple now has a place to call home for the holidays.

So what do the children think?

"My daughter said, 'heaven' when we pulled up. And I was like, 'What was that?' And she said, 'heaven,'" Daniel recalled.