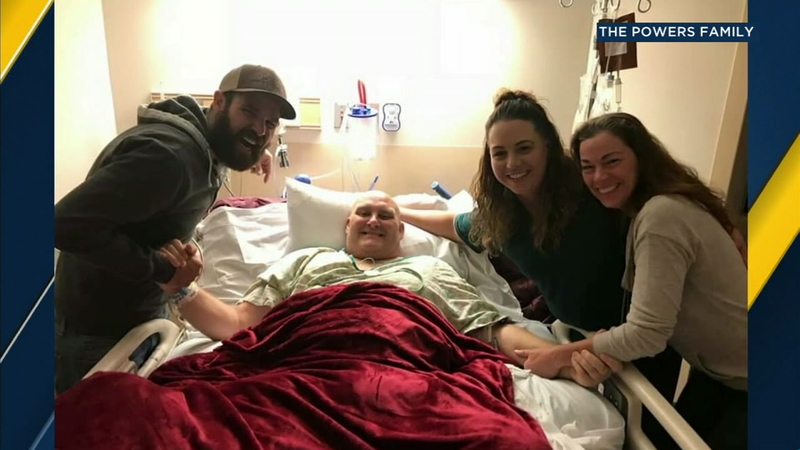 SAN BERNARDINO, Calif. (KABC) -- A San Bernardino County Sheriff's Department sergeant who was wounded in the Las Vegas mass shooting said it's changed his life immensely. On Wednesday, at sheriff's headquarters, he and his wife reflected on that horrific night, less than a week before the first anniversary of the shooting.

"We went there because it was our anniversary," said Brad Powers about their trip to Las Vegas last year. "It's Vegas and no kids, and you get to go and have fun."

Brad and his wife, Kristin, who's a dispatcher with the Fontana Police Department, said they were only at the concert for about an hour when gunfire erupted.

RELATED: Ontario police officer wounded in Las Vegas mass shooting is back on the job

A total of 58 people were killed and hundreds more were either hit by gunfire or shrapnel, or trampled as they tried to escape.

"The noise was so loud, it literally shook your insides," said Kristin, who watched as her husband was struck by gunfire. "He rolled away from me and mouthed to me, 'Babe, I've been shot.'"

Powers had been shot in the pelvis but never lost consciousness. He said his training as a law enforcement officer taught him to breathe slowly and not panic, even though he was losing blood. He said his wife dragged him to safety.


"I was still getting fired at, the bullets ricocheting around us," Brad said. "She picked me up and dragged me herself from being out in the open to underneath the grandstands."

Brad said that during the chaos, his wife begged with the driver of a truck to stop and help them get to the hospital.

"Kristin went up to the driver's side and was begging her to please take us to the hospital," Brad said.

RELATED: Timeline of mass shooting on the Las Vegas strip

He added that his wife told the driver, "If I don't get a ride, my husband is going to die."

Kristin said it only took eight minutes to get to the hospital. She said her husband lost so much blood, it's a miracle he survived.

"He has, at this point, none of his own blood," said Kristen. "That's how many blood transfusions he had to have."

As the anniversary of the massacre approaches, the couple said it helps to talk about it.

"I know with us, when we talk about our story and what happened, every time we get a little better," Kristen said. "We move forward another step."

Last week, the couple made their first trip to Las Vegas since the shooting. They met up with a group of survivors at the hospital where they were all treated. Among them was the woman who drove them to the hospital, as well as another victim who was in the back of the truck.

"We're almost always in contact," Brad said. "We're in touch at least once a week, if not more."

Brad and Kristin also renewed their wedding vows to celebrate their 13th anniversary. It took place at a small chapel not far from the scene of the shooting.