All of the proceeds from ticket sales will go directly to the Red Cross and the National Bank of Ukraine Fund.
KABC
By Marc Cota-Robles 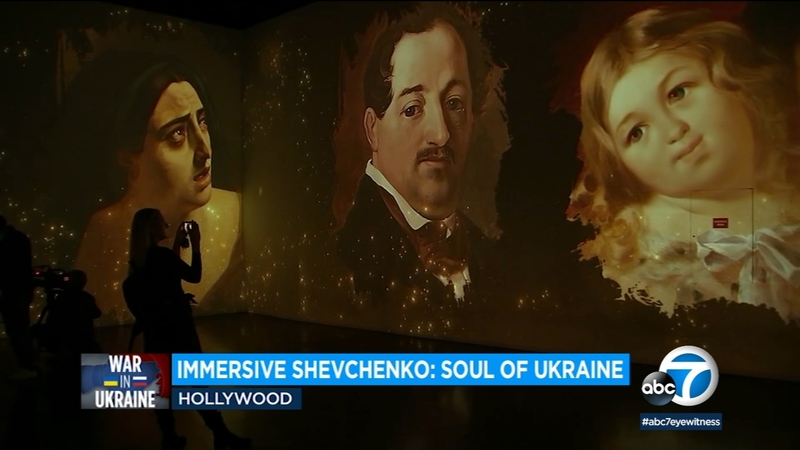 HOLLYWOOD (KABC) -- Nearing 20 days of war in Ukraine, the international support to help those caught in the deadly crisis continues to expand.

One of the latest fundraising efforts is a new show set to take the spotlight at the immersive Van Gogh exhibit in Hollywood.

It's called "Immersive Shevchenko: Soul of Ukraine," and it's a one-day only exhibit set to open Tuesday, March 15, in six cities across North America.

Former "Dancing with the Stars" pro Karina Smirnoff, who was born in Ukraine, was among those who helped unveil the exhibit. She said to see what's happening to the Ukrainian people is heartbreaking.

"It's just horrifying, you don't comprehend that this is reality for a lot of families," said Smirnoff. "I think the emotions go between rage, anger and depression."

All of the proceeds from ticket sales will go directly to the Red Cross and the National Bank of Ukraine Fund, and there's already more than $170,000 raised.

Throughout his life, Shevchenko showed courage and resilience in his fight for freedom of the Ukrainian people. Now, his work will help advocate for Ukraine's independence. For Smirnoff - her heartbreak has room for hope.

"Everything is being bombed, but the hope and Ukrainian soul will never be destroyed," she said.