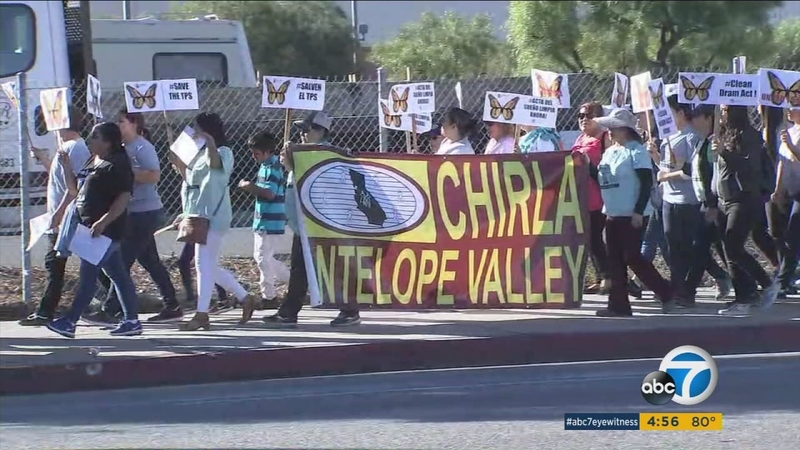 NORTH HOLLYWOOD, LOS ANGELES (KABC) -- For more than 15 years, immigrant rights activists have marched through the streets of the San Fernando Valley on the day before Thanksgiving.

Their message, according to the Coalition for Humane Immigrant Rights of Los Angeles, also known as CHIRLA, is this: "We're here in our march united to stay. Understanding that we are marching in order to fight for our rightful place in this country, our home," said Angelica Salas.

Around 100 marched in the pre-Thanksgiving heat. Many of them were students, DACA recipients, who went before the cameras urging Congress to come up with something that'll allow them to stay.

Itayu only gave her first name. She said she was brought here from Mexico when she was six months old. "I am a DACA recipient. We've been fighting for the Dream Act for TPS and for a clean Dream Act."

A clean Dream Act would be passage of federal legislation that will protect Dreamers but not use the legislation to increase spending on border enforcement, expand immigrant detention or build a wall, according to the marchers.

In September, President Donald Trump ordered an end to DACA and gave Congress six months to come up with a new plan.

Manuel Lopez says he's in a tough spot now. "I can't live the American dream because I'm not American. Sure, you can live a decent life living in L.A. You can speak the language, even celebrate the American culture. But when it comes to being a true American it means you have to be documented."