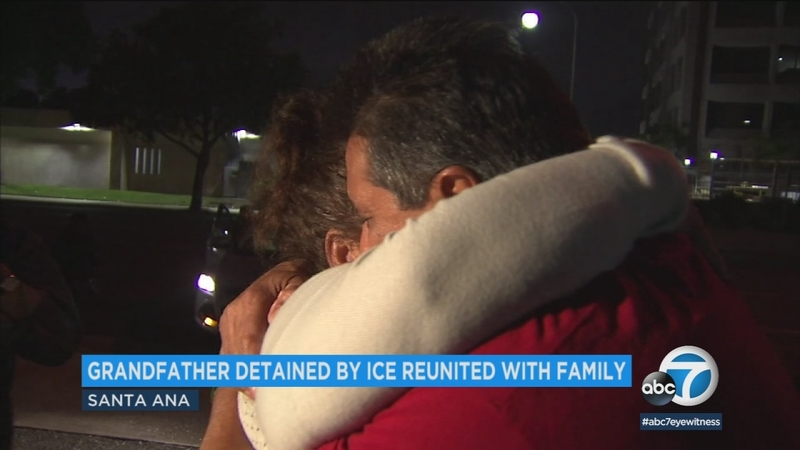 SANTA ANA, Calif. (KABC) -- An Arleta man, who was given legal status during the Reagan administration, was released from ICE custody late Friday night.

Luis Garcia, 62, embraced family members outside a Santa Ana detention center after a judge ruled earlier in the day that he be released and return to his status as a permanent resident. The status paves the way for Garcia to start the naturalization process and become a U.S. citizen.

"When I heard what (the judge) said, I literally started crying," Garcia said, tears in his eyes. "Hopefully, everyone inside has the same opportunity to prove they're not criminals. We're not criminals."

Mackenzie Mackins, Garcia's attorney, said that he can go back to his normal life such as work, paying taxes and being with his family. All of Garcia's children and grandchildren are U.S. citizens.

Garcia was detained by ICE agents at his home on June 10 in front of his family. Court records showed Garcia pleaded no contest to a misdemeanor charge over a domestic violence dispute in 2001. His daughter said the family thought the case was closed.

At the time, their father's attorney had advised him to take the no contest plea. The father of five spent two days of his 28-day sentence, paid fines and attended domestic violence classes with his wife. The couple, who remain married, have nine grandchildren and two great-grandchildren.

Nearly 50 years ago, when Garcia came to the U.S. as a young kid, he was made a legal permanent resident under the Reagan administration's Immigration Reform and Control Act.

His family had asked the community for support through an online petition that urged people to call ICE and demand their father's release. They also contacted an immigration attorney and the ACLU.

"I think that the government saw the equities in his case and saw the media attention and the people in the community willing to support Mr. Garcia and they wanted to resolve the case quickly. That being said, the fight is not over. There are many people in detention in Mr. Garcia's position that need help and support from their community," Mackins said.

She added that a number of factors played a role in his release, such as that he is a homeowner, he pays taxes, has a job, his children are all citizens and that community members as well as his employers came to support him.