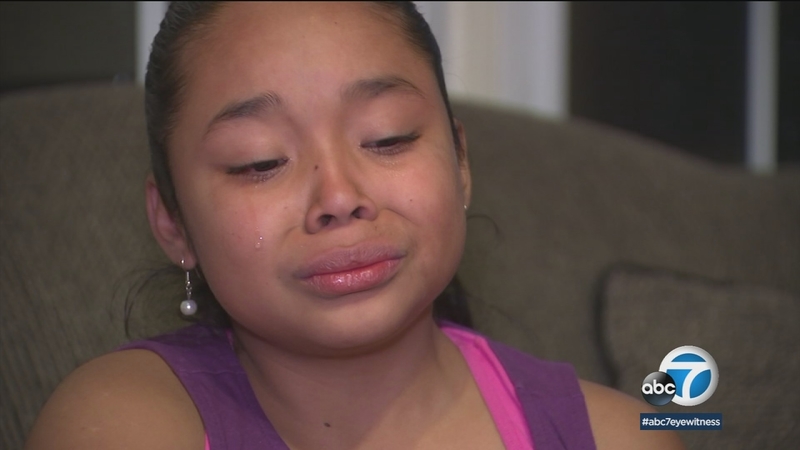 Yesenia Ramirez says she and her family were victims of extortion; a gang demanded money and when they couldn't pay, they asked for her eldest child in return.

"My husband said they were leaving that same day and couldn't wait more because she was in danger," said Yesenia Escobar de Ramirez.

Once the entire family left El Salvador, Walter Ramirez made his way to the U.S.-Mexico border with his 5-year-old daughter, Sofia, seeking asylum. That's when the two were separated.

Immigration authorities say officers with the family unit were unable to positively confirm the father-daughter relationship. Immigration and Customs Enforcement said out of concern for the child's safety, she was transferred to the Office of Refugee Resettlement for placement. Sofia is now in Texas.

The same is true for another Salvadoran family seeking asylum: Jose Fuentes and his 11-month-old boy, Walter.

"My client was told that if he didn't let his son go, he would have it worse," said Fuentes' attorney, Noreen Barcena.

ICE said in part: "Historically, some criminal smuggling organizations have paired non-relative children and adults with each other to minimize the chance of being detained if caught being smuggled across the border. In view of these criminal tactics, and for the safety of the children involved, ICE must require documentation of these family relationships. ICE was unable to render a positive determination of Mr. Fuentes' relationship to the child during the custody review process."

Both families argue they had the necessary documents, including identification and birth certificates.

"He had everything to prove he is the father," said Yesenia Ramirez.

Earlier this week, a coalition of immigrant rights organizations filed a complaint with the Department of Homeland Security's office for Civil Rights and Civil Liberties, saying it is cruel and unlawful to separate family members for the sole purpose of deterring migration. The complaint detailed the cases of multiple families, including Jose Fuentes and Walter Ramirez.

U.S. Senator Kamala Harris is trying to reunite the Fuentes family. A spokesperson said, "Promises were made by Customs and Border Protection and ICE to Senator Harris to keep families together, and yet federal authorities took Jose's one-year-old son, Mateo, away from him. This is yet another example of the systemic management failures that exist within the Department of Homeland Security. As Senator Harris has noted, the separation of a child from their parent at the border is traumatic and she will work diligently to reunite this family."

Eyewitness News spoke with Walter's mother, Olivia Caceres, who is staying at a shelter in Mexico. Caceres said she is worried and confused by the separation.

Pueblo Sin Fronteras, an organization that provides help to migrants and refugees, says it helped the Fuentes family prepare to request asylum and knows Fuentes had his child's original birth certificate.

Yesenia Ramirez and her 12-year-old daughter, Andrea, made it to Los Angeles. Her husband and 20-year-old, Alexa, are still detained by immigration officials.

Attorney Barcena says that while the children could be released to family, it may complicate their fathers' cases.

Andrea found comfort in drawing a picture of her younger sister, Sofia.

"I want her with me. I don't know why they do this. I understand if she is so little," said Andrea, through tears, adding she has faith the family will be complete again.

Fuentes and Ramirez have immigration hearings next month.

ABC7 has decided to remove the comments section from stories. We believe very strongly that our audience should have an opportunity to discuss and debate events in our world; however, we have not been able to moderate the comments as well as we would like. Instead of hosting a platform that could allow a few loud and ugly voices to dominate a conversation, we want to encourage everyone to join us on our social media platforms and speak out there.
Facebook: facebook.com/abc7
Twitter: twitter.com/abc7
Report a correction or typo
Related topics:
family & parentinglos angeleslos angeles countyfamilyiceimmigration
Copyright © 2021 KABC-TV. All Rights Reserved.
TOP STORIES
Alec Baldwin movie camera crew walked off before shooting, member says
Warrant: Baldwin didn't know weapon contained live round
'Firestorm' tells Oakland Hills fire survivors' stories 30 years later
Juvenile arrested on suspicion of murder in Fullerton shooting
EXPLAINER: Who can get a booster and where to make your appointment
LAX launches pilot program for travelers to pre-schedule TSA screening
Ruptured sewer line causes sinkhole, sewage spill near Boyle Heights
Show More
Paul Walker's daughter gets married at wedding attended by Vin Diesel
Vaccine proof mandates: Will LA's In-N-Out restaurants comply?
Brandon Lee's family speaks out after fatal shooting on movie set
3 bears take leisurely stroll through Arcadia neighborhood
Chappelle 'open' to dialogue with Netflix employees amid controversy
More TOP STORIES News