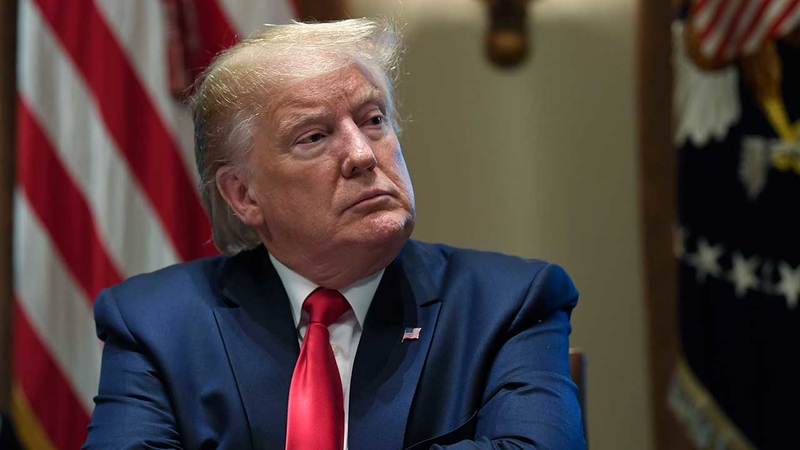 After two weeks of public hearings, some new polling numbers released Monday morning show where California voters stand on the impeachment inquiry of President Donald Trump's dealings with Ukraine and the administration's attempts to block the investigation.

A SurveyUSA poll conducted late last week found 54% of Californians think there's enough evidence for the House to draft an article of impeachment, down 4% from a month ago. Nationwide, 49% of Americans who are registered to vote think there is enough evidence.

Of those surveyed, 57% think the House should pass at least one article of impeachment. That percentage remains unchanged since last month. That percentage is slightly lower when surveying registered voters across the U.S., holding at 51%, up from 49% last month.

Also holding steady is the 52% of voters who think there's enough evidence for the Senate to convict the President in an impeachment trial. Meanwhile, 47% of registered Americans agree with that statement.

Should the Senate convict the president? 55% of California voters say yes, up 1% from last month.

Below are the findings from the latest SurveyUSA poll on California voters:

In an impeachment trial in the US Senate today, should the Senate convict President Trump? Or find President Trump not guilty?
55% Convict Trump
33% Find Trump Not Guilty
11% Do Not Know Enough To Say

Congressional impeachment hearings are being televised and streamed "live," in real time. Which best describes you?

13% Actively Avoiding "live" Coverage And News Stories
20% Not Interested / Sometimes, Just By Chance, See Highlights
30% Unable To Watch "live" But Seek Out Summaries And Highlights
27% Watching As Much Of It "live" As I Can
8% Watching Almost All Of It "live"
2% Not Sure

Democrats could soon turn the impeachment process over to the House Judiciary Committee. They're moving "expeditiously" ahead as House Speaker Nancy Pelosi has instructed.

In the coming weeks, the House intelligence panel will submit a report to the Judiciary panel, and then Democrats will consider drafting articles of impeachment. The articles could cover matters beyond Trump's efforts to push Ukraine to investigate Democrats, including special counsel Robert Mueller's investigation, but no decisions have been made.