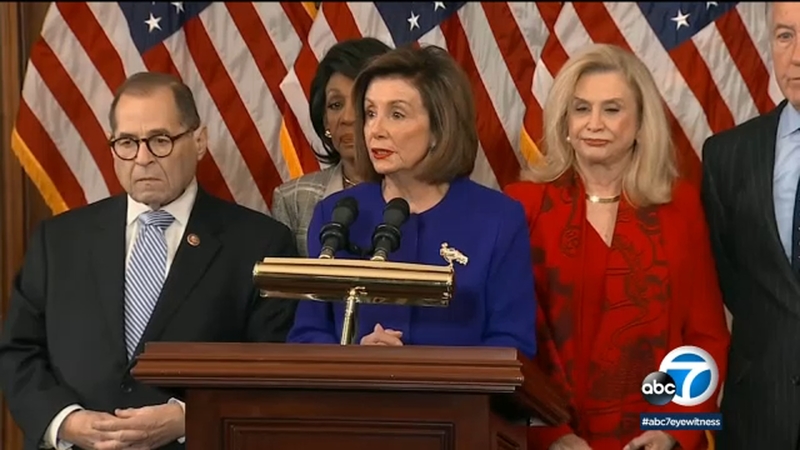 "The first order of business for members of Congress is the solemn act to take an oath to protect and defend the Constitution of the United States," Pelosi said.

One article is for abuse of power. The second is obstruction of Congress. Both are related to the president's dealings with Ukraine and the investigation into his actions.

The Democratic majority in the House makes it all but certain that Trump will become just the third U.S. president to be impeached.

Jessica Levinson, a law profesor at Loyola Marymount University, says "These articles of impeachment are actually quite confined. They talk about abuse of power. They talk about obstruction of Congress. I think the House Democrats decided let's keep it neat, let's keep it tight, let's not give people a lot to argue about."

Rep. Kevin McCarthy from Bakersfield said: "Just because you created a timeline to impeach a president that you disliked, you ignored facts. We would never be here if they had paid attention to the facts or the hearings."

I spoke to Congressman Adam Schiff from Burbank about that Tuesday afternoon. He says "That argument of let's wait another eight months or another 26 months is basically saying let's just let the president cheat in the next election."

After the House finishes then it would move to the Senate which is controlled by Republicans. Things there will undoubtedly look very different.

"We know you need a two-thirds vote in the Senate to convict and that is very unlikely in this current political climate," Levinson said.