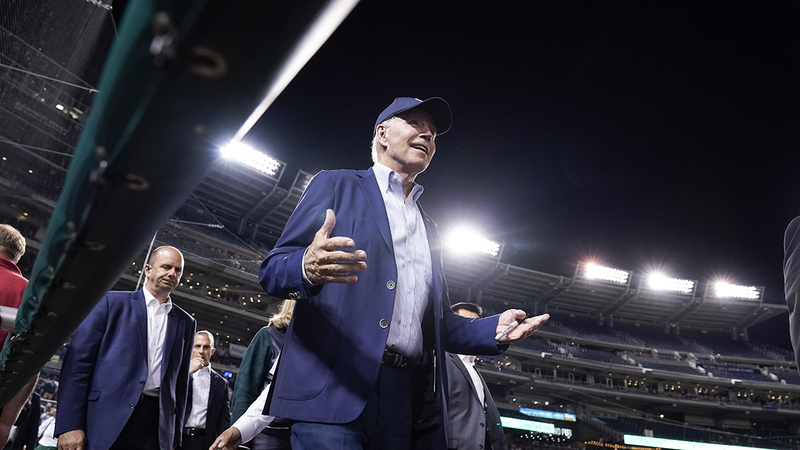 Biden struggles to unite Democrats ahead of key votes

WASHINGTON -- Intense phone calls, ice cream and some bipartisanship -- for a few hours, anyway. The Congressional Baseball Game had it all as lawmakers of all stripes came together Wednesday night to enjoy a little of America's favorite pastime.

The traditional game was held hours before a potential government shutdown and crucial infrastructure bill vote.

Though many lawmakers were at Washington's Nationals Park ready to play ball, business was still booming on Capitol Hill. Senate Majority Leader Chuck Schumer announced senators reached a deal to avert a government shutdown just hours before it would've taken effect. But it wasn't game over for Democrats just yet.

On Thursday, lawmakers are set to vote on President Joe Biden's widely-touted $1.2 trillion infrastructure bill. The White House has struggled to get moderates like Sens. Kyrsten Sinema, D-Ariz., and Joseph Manchin, D-W.Va., on board as well as Democratic progressives who worry about social spending programs being cut from the bill as a result of those negotiations. If Thursday's vote fails, it would be a big hit to Biden's "Build Back Better" agenda, and it would highlight a lack of Democratic Party consensus ahead of the midterm elections.

With just hours left until government funding runs out, senators said they are ready to move forward to avoid a government shutdown.

So, Wednesday's game had more implications than just the usual bragging rights, and it showed, because big players came out, and not just to cheer on their colleagues.

After the first inning, the game paused. Then, Biden appeared from behind home plate. Fans sitting in the Democratic section erupted into cheers while Republican fans booed and chanted for the game to resume.

Biden then sat in the Democrats' dugout for some time, talking with lawmakers. On multiple occasions, lawmakers handed the president their phones to either take photos with them or jump on calls. More than once he was seen looking intense while leaning on the railing of the dugout and talking on the phone.

But, it wasn't all work. Biden handed out ice cream bars to both teams, complete with the presidential seal.

House Speaker Nancy Pelosi and second gentleman Doug Emhoff didn't suit up to play, but cheered on Democrats. Pelosi was also busy multitasking, watching the game while talking animatedly on the phone. She appeared to spend most of the night busy with negotiations as Democratic leaders go into crunch mode trying to get their lawmakers on the same page ahead of Thursday's infrastructure vote. Progressive Democrats on Tuesday warned Pelosi and other party leaders that without a deal on a broader social policy bill, they did not intend to support the bipartisan infrastructure bill.

Earlier in the evening Wednesday, Biden was inducted into the Congressional Baseball Hall of Fame. His granddaughter, Naomi Biden, accepted the award on his behalf, leading many to believe the president was caught up in infrastructure negotiations.

Democrats can hope those negotiations go better for Democrats than on the field. Republican lawmakers led the game for most of the night and ended up taking home the trophy, winning 13-12.