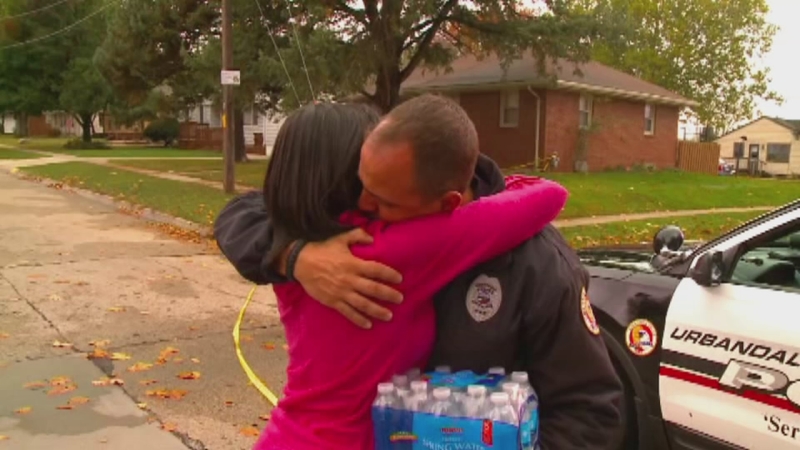 Local TV station KCCI captured an emotional scene later in the day when a woman approached an Urbandale police officer on a residential street, hugged him and offered to pray for him and his colleagues.

"I can't even imagine," the woman said, her voice cracking as she handed the officer a package of bottled water. "This is the only think I know, how to help, is to feed. And I want you guys to be hydrated."

"I want you to go home to your families, because I want my dad to come home to me and I want my friends to come home to me," she continued, embracing the policeman. "I'm sorry and I'm here for you all. I don't know how else to help or what else to do."

The officer responded: "Your prayers are all we need."

According to Des Moines police, the slain police officers appeared to have been shot overnight while sitting in their police cruisers.

Scott Michael Greene has been named as a suspect in their shootings.

Thank you to our community for the outpouring of support. We are beyond blessed to serve the community of Urbandale. pic.twitter.com/0qZxhhjJzx

Authorities said the 46-year-old was captured in Dallas County, Iowa, Wednesday morning after he flagged down a state employee on a road and asked to call 911.

He was then transported to a hospital in Des Moines, but is expected to be released from the medical center on Thursday, a police spokesman said.

No charges have yet been filed in the case. Investigators are considering possible first-degree murder counts.

The motive for the shooting remains unclear.