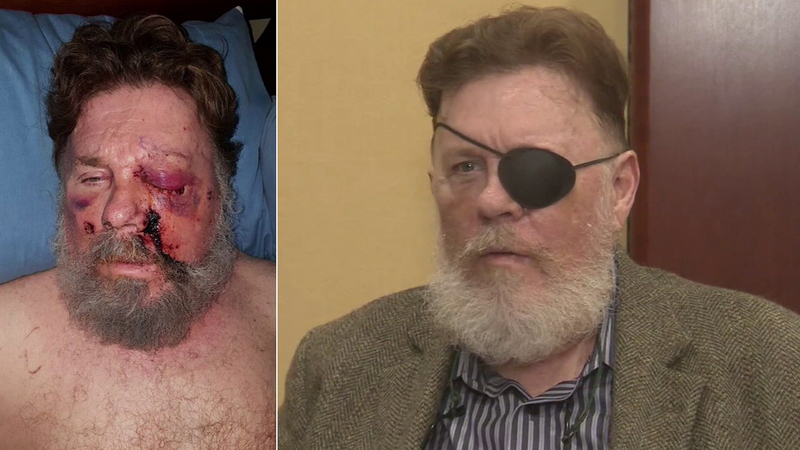 IRVINE, Calif. (KABC) -- Joseph Cavins' face bears the scars after his electronic cigarette exploded. The 63-year-old now wears a black patch because his left eye had to be removed and replaced with a prosthetic one.

Cavins was vaping at home while on his computer last month.


"I sat it down and I believe I was going to get a pen or something from this bookshelf over here and then bam," the Irvine resident said.

The explosion sent shrapnel 9 feet high into the ceiling and caused a fire. Fragments were also sent flying, breaking some of Cavins' facial bones.
"I felt like I was hit on the side of the head and everything went south from there," Cavins said.

His wife put out the fire and then rushed him to the hospital.

"This is becoming all too common, and it's now a national problem," said attorney Greg Bentley with law firm Shernoff Bidart Echeverria Bentley, as he showed the charred battery from Cavins' e-cigarette.

He says his firm has hired two experts to test the batteries and chargers involved. Bentley says the batteries were manufactured in China without regulation.


"It's manufactured cheaply, and it's manufactured in a dirty environment and particles get inside the battery itself. It makes them more susceptible to overheating and exploding," Bentley said.

Last week, the FDA issued new rules banning the sale of e-cigarettes to minors and treating them the same as tobacco cigarettes. Bentley calls it a good first step, but he says "as to the batteries exploding, I don't believe these regulations are going to help."

As Cavins, a family and marriage counselor, prepares to return to work, his attorney plans to file a lawsuit against those allegedly involved, including Vapor Loft in Irvine, where Cavins says he bought batteries.

The owner of Vapor Loft had no comment Tuesday.