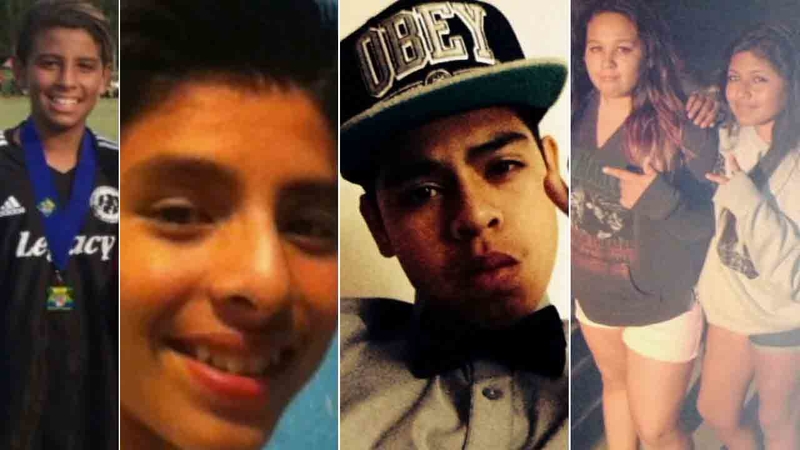 MISSION VIEJO, Calif. (KABC) -- All victims have been identified in the fatal fiery crash on the southbound 5 Freeway that left five teenagers dead in Irvine Saturday morning. Hundreds of people attended a vigil at Capistrano Valley High School in Mission Viejo Sunday night to remember them.

United in their grief, students and their families gathered to remember the five young lives taken too soon. Candles and flowers were placed next to their pictures, showing the smiles they were known to wear.

The crash occurred on the southbound 5 Freeway between Sand Canyon Avenue and Alton Parkway around 2:15 a.m. Saturday. Orange County fire officials say the five friends were returning home from Knott's Scary Farm when their car drifted off the road for an unknown reason and hit a guardrail.

Responding firefighters found a 4-door, 1995 BMW sedan resting on top of a 20-foot barrier on the side of the freeway. The crash had also caused a .25 acre brush fire.

Crews on scene of a car crash in Irvine that left five teens dead on Saturday, Oct. 4, 2014.

Bradley Morales, the 16-year-old unlicensed driver, was the lone survivor. He was listed in serious but stable condition at Mission Hospital.

"Following neurosurgery, (Moreno) was placed in the hospital's Pediatric Intensive Care Unit. He is recovering from a large skull fracture and an epidural hematoma (collection of blood outside the brain)," according to a statement from the hospital.

All the passengers, including three teenage boys and two girls, were killed and their bodies were badly burned, officials said. They were identified as Matthew Melo, Alex Sotelo, Brandon Moreno, Jenny Campos and Jenny Bahena.

Melo's father, Ivan Melo, wore his son's cleats to the candlelight vigil around his neck Sunday night and a medal from a soccer tournament.

"Never thought or crossed my mind that this would ever happen, you know, it should've never happened," Ivan Melo said.

Melo and Sotelo were talented soccer players on the same soccer team in the Mission Viejo Soccer Club.

"They always got the job done, they were just beautiful people," soccer teammate Jorge Machaca said. "I love them all so much, and I will always love them, they'll always have a place in my heart."

Teammates and family members shared their sadness with the crowd and the impact the teenagers had on so many lives.

Gavin Aitkin had played soccer with Melo for three years and wished he would've had the chance to say goodbye.

"I looked up to him. He was what I wanted to be. He was so confident, he had this air of confidence that you couldn't break, no matter what you did," Aitkin said.

Campos, 15, lived in Aliso Viejo with her mother, step father, brother and three sisters. Campos and Bahena both attended Laguna Hills High School and were players on the water polo team.

Campos' mother, Aurora Barraza, says her daughter did not have a cell phone. Barraza says she waited for Campos to get home, but had to go to work. A short time later, the family received the devastating news.

"We had her quinceanera in July, there was about 300 and some people there, it was a happy moment, and three months later, something like this happening, it's hard for any of us to grasp," Campos' cousin, Diana Vizcarra said.

Family members say Campos was very close to her mother and took care of her younger sisters. She also wanted to be a criminal investigator.

Melo's father says he does not harbor any hatred toward the driver, who did not have a driver's license.

Both girls and one of the boys killed were not wearing a seat belt, the CHP said. Drugs and alcohol were not involved. No charges have been filed in the case.