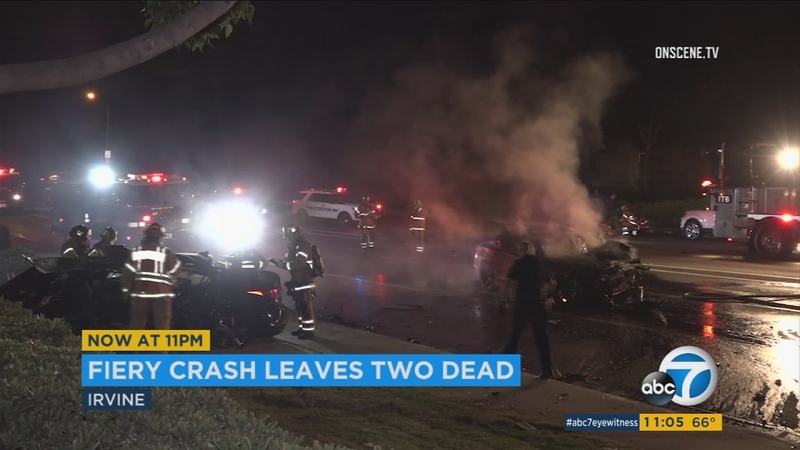 IRVINE, Calif. (KABC) -- Two men were killed and several others were injured in a fiery two-car crash overnight in Irvine.

The crash was reported about 3:30 a.m. Saturday at the intersection of Michelson Drive and Harvard Avenue.

Firefighters said there were four people in a Hyundai Elantra that crashed with an Infiniti that had two people inside.

The Infiniti caught fire and a passenger, a man in his 30s, was pulled out by a witness before being taken to a local trauma center. The condition of the Infiniti driver was not immediately clear.

A resident of a nearby apartment building recorded video of the crash after hearing it.

"My roommates came out and said that the car was all smoke and on fire. I went to the balcony and I saw this, I started to take video," witness Yubin Sun said.

Two men in the Hyundai died at the scene. They were identified as the driver Kasean Herrera, 23, of Irvine, and passenger Jeremy Shankling, 24, of Los Angeles.

There were also two women in the Hyundai who were trapped, and firefighters used the Jaws of Life to get them out. They were also taken to a trauma center with critical injuries, authorities said.

The cause of the crash was unclear, but area residents said they often see people speeding through the intersection.