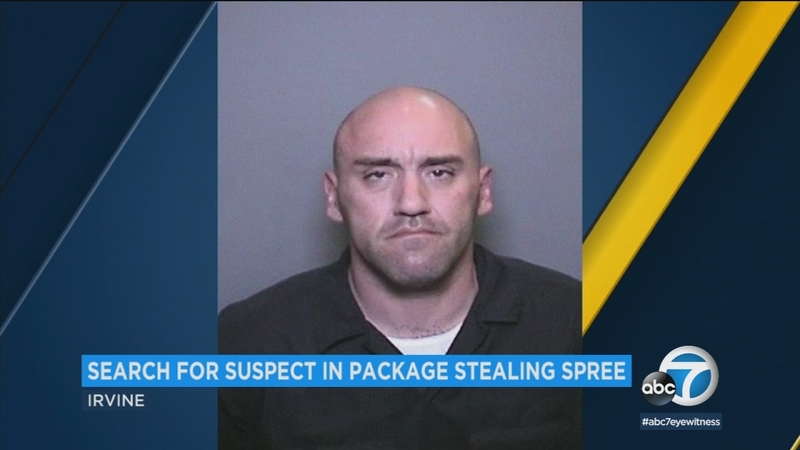 Officers say they have at least three videos of 33-year-old Anthony Palusso swiping packages in the city. Palusso is someone they've had contact with before and he may be connected to many more thefts.

"He also is suspected in about 20 cases throughout Irvine, and we know that other cities are looking at him in their cases as well," said Kim Mohr, spokesperson for the Irvine Police Department.

His prolific stealing spree prompted one neighborhood to put out their own flier. It shows several photos residents believe to be him, and the silver Toyota Tacoma he may be driving.

"That's great, anything residents can do to be proactive, but also want them to remember to call us," said Mohr.

The thief is targeting neighborhoods in the northern part of the city, areas where many residents say this kind of crime is unheard of.

With the holiday season here, Mohr is encouraging people to pay close attention to their deliveries. "Track your package, so you know when it's coming," said Mohr. "If you can't be home, because you're at work, consider using a P.O. box. You can also ask a friend or a trusted neighbor."

Police want to catch this grinch before he can steal again, and residents want him to hear this message: "For you to steal something like this, a gift for a baby or a kid, waiting for his Santa to drop off a gift, that's really sad," said Simon Hage.

If you see Palusso or have any information about him, you're asked to call Irvine police.

ABC7 has decided to remove the comments section from stories. We believe very strongly that our audience should have an opportunity to discuss and debate events in our world; however, we have not been able to moderate the comments as well as we would like. Instead of hosting a platform that could allow a few loud and ugly voices to dominate a conversation, we want to encourage everyone to join us on our social media platforms and speak out there.
Facebook: facebook.com/abc7
Twitter: twitter.com/abc7
Report a correction or typo
Related topics:
irvineorange countycrimetheftholidaypackage theft
Copyright © 2022 KABC Television, LLC. All rights reserved.
TOP STORIES
Texas gunman threatened rapes, shootings on Yubo app, users say
Police inaction moves to center of Uvalde shooting probe
27-year-old arrested for murder after man killed inside Downey home
$6.13 a gallon: Price of gas in LA County surges to record high
Suspect shot, killed by Ontario police after chase ends in crash
CA 'red flag' law can temporarily seize guns if someone makes threat
Parole recommended for Manson follower Patricia Krenwinkel
Show More
'All of Us:' API group recruiting participants for life-changing study
LA Archbishop José Gomez tests positive for COVID
'Top Gun' sequel introduces new pilots, pays homage to 1986 film
Garden Grove Strawberry Festival returns after 2-year hiatus
Lakers hire Darvin Ham as head coach, ESPN reports
More TOP STORIES News