A rally in support of Armenia in north Fresno started peacefully but ended with three people taken to a hospital with stab wounds on Wednesday evening.
KFSN
By ABC30.com staff 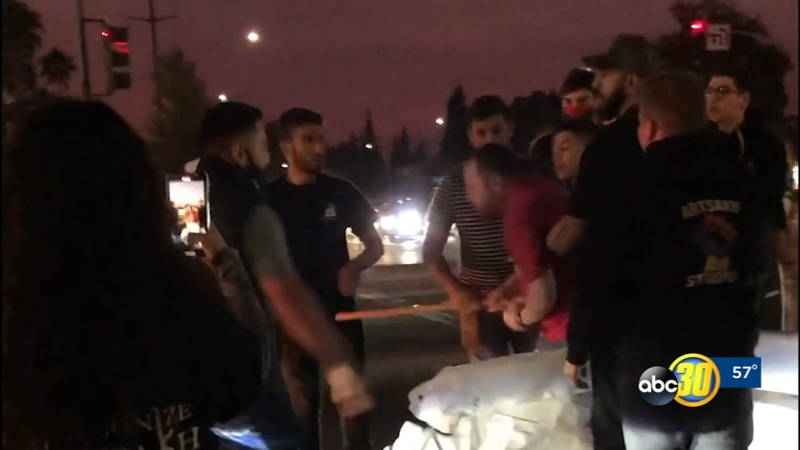 FRESNO, Calif. -- A rally in support of Armenia in Central California started peacefully but ended with three people taken to a hospital with stab wounds on Wednesday evening.

Police have identified the man arrested for stabbing the three people during the "Defend Armenia" demonstration in north Fresno as 41-year-old Jaime Fonseca.

The incident happened around 6:40 p.m. after about 150 demonstrators partially blocked off lanes near the River Park Shopping Center.

A woman who helped organize a protest in Yorba Linda has been accused of deliberately driving into a crowd of counterprotesters, seriously injuring two people.

Police say several drivers were upset about traffic being blocked by the rally.

That's when Fonseca got out of his vehicle and had a verbal exchange with the protesters, police say.

"He was cussing us out and threatening us that he is going to damage our cars and also kill us," said Katarina Melikian, who was at the rally.

In a witness video shared with ABC30, ABC7's sister station in Fresno, Fonseca appears to rip the group's banner.

Police say he went back to his vehicle, pulled out a wooden stick and began swinging it violently at protesters.

As demonstrators attempted to fend him off, he allegedly pulled out a knife and started swiping at people.

Stunned witnesses and other drivers watched and recorded the chaotic scene.

One of the victims was slashed in the arm, another in the chest and a third person's finger was sliced. Police say the victims are three men between the ages of 18 and 26. They are all expected to recover.

Police say Fonseca then allegedly drove off through the shopping center, ramming into cars in his path.

He was found by officers a short time later. The knife and wooden stick were also located.

Demonstrators were left in shock and saddened their message was lost and their demonstration marred.

UPDATE: Police say four cars blocked off Blackstone northbound at Nees which upset drivers. The suspect stopped and confronted them before pulling out a stick and a knife. Police say he then started “swinging the knife violently”slashing three men. @ABC30 pic.twitter.com/IKFPlSoekQ

"People are going to pay more attention to this than what we are trying to bring awareness to, which is Armenia, so it makes us angry and mad, but we didn't do anything violent back to him," added another demonstrator, Sona Danielyan.

Demonstrators say this won't discourage their cause.

"We are not going to stop fighting for our country," said Katarina Melikia.