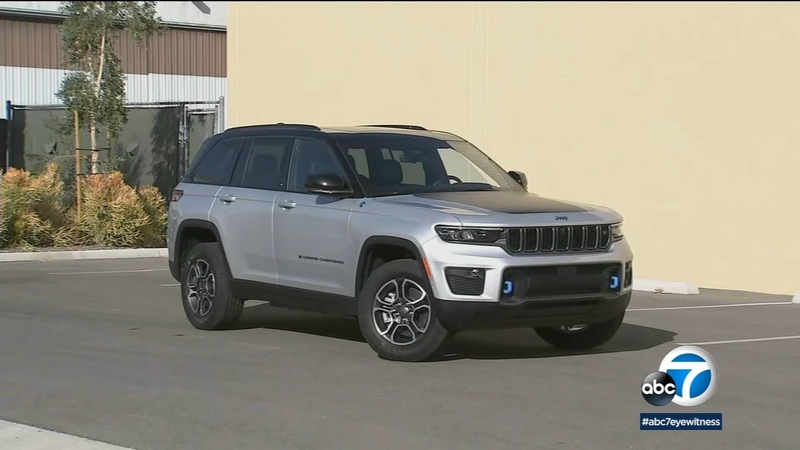 Last year, Jeep brought out a plug-in hybrid version of its signature Wrangler model, the 4xe. Pure battery power for short distances, and a conventional engine for longer trips.

But while the Wrangler has quite a following, it's not the kind of SUV that most buyers are looking for.

So now, the 4xe lineup has been doubled, with the Grand Cherokee 4xe. Same power system, but in a larger SUV with more widespread appeal. Prices start at $55,865 before incentives.

The idea is the same as with the Wrangler 4xe, as they're both PHEVs or plug-in hybrids. Plug the new Grand Cherokee in and charge it up, and you've got battery power for up to 26 miles.

With the electric drive system's menu, you can even save your battery for later. For example, when you're out on the dirt. This Grand Cherokee Trailhawk model tackles rough terrain like Jeeps always have, but imagine doing it all purely on electricity.

Or, go gas-free for short commutes and local errands on pavement. Drive with anything but full throttle, and the SUV will stay in battery mode, even on the freeway. (If you do push down on the accelerator pretty hard, the engine will automatically come on. Official "MPGe," how the EPA calculates the overall mileage of the electric and gasoline systems combined, is an impressive number: 56.

And look for more electric-powered Jeeps in the future. They've brought out a second full-EV Wrangler concept called the Magneto 2.0, and also confirmed a dedicated electric Jeep crossover, still unnamed, which is scheduled to be launched next year.

Like many brands, Jeep has promised a future with many electric options, as has its parent company, Stellantis. The future is certainly electric. But they're also hedging their bets that conventional power will be needed by many people, far into the future.

This doesn't happen very often, but an all-new highly efficient inline six-cylinder engine had been revealed by the company, which they've called Hurricane.

Advanced technology, including turbocharging, to power Jeeps and other company models in the future. Projected power output will range from 400 to 500 horsepower. Fuel savings over V8 engines, but with similar power.

But the coming years and decades will definitely be one of battery-powered Jeep models. This newest plug-in hybrid Grand Cherokee is part of a head start in moving toward that overall direction.