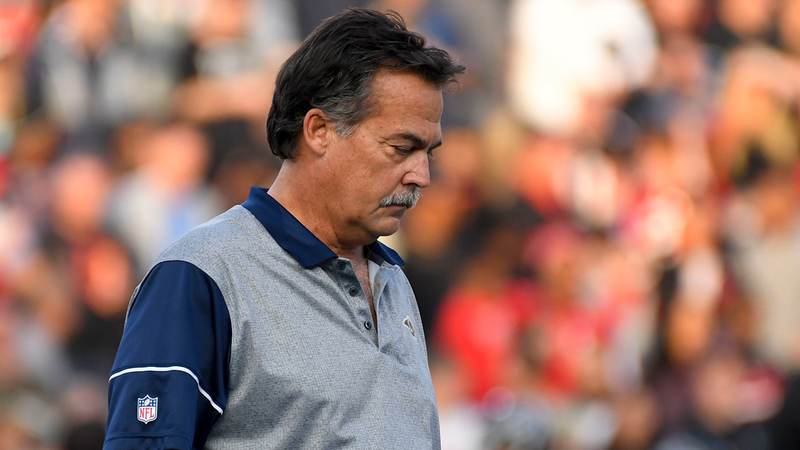 LOS ANGELES (KABC) -- Jeff Fisher has been fired as the head coach of the Los Angeles Rams, the team announced on Monday.

"Making a decision such as this - especially during the season - is one of the most difficult in sports," said Rams owner Stan Kroenke in a statement. "I have great respect for Jeff as a coach, person, father and friend."

At an afternoon press conference, Rams COO Kevin Demoff said it was time for a change but clarified the losing streak does not fall on one person.

"This is an organizational failure, and I think anytime you stand up here and you let a head coach go, we all have to take a look in the mirror," he said. "This is not just about the head coach or the coaching staff, we have to improve across the board..."

#LIVE “This team is not where it needs to be and we own up to that,” #Rams COO says https://t.co/C8nRNwa2wB pic.twitter.com/HdxOI7O6Tr

"He has worked tirelessly despite some challenging circumstances," Kroenke said. "He played an integral role in helping this team make history in returning the NFL to Los Angeles, and we always will be grateful for his commitment and dedication to our organization."

"However, this is the right time to make a change as our performance has not lived up to my or our fans' expectations," Kroenke continued. "We all are focused on improving as an organization and building a team that makes Los Angeles proud. Our mission is to celebrate a Super Bowl title with our fans in Los Angeles. Today is the first step to bringing us closer to that goal."

The team stated that special teams coordinator John Fassel would serve as interim head coach. The hiring of a new head coach is expected at some point in January, unless the new coach heads to the Super Bowl.

It was revealed just a week earlier that Fisher had agreed to a contract extension prior to the season. At that same time, it was announced that Rams General Manager Les Snead was signed to an extension as well. His status with the team was not addressed in the statement released by the team on Monday.

After the Rams defeat to the New Orleans Saints in Week 12, Fisher was involved in a public spat with Hall of Fame running back Eric Dickerson, who was angered after he said he was denied sideline access after his criticism of the team.

With the team's 42-14 loss to the Atlanta Falcons on Sunday, Fisher tied the all-time record for losses for an NFL head coach with 165. In 20 full seasons as an NFL head coach, Fisher's teams have only finished better than .500 six times.

Fisher's closest shot at a Super Bowl championship came during the 1999 season as head coach of the Tennessee Titans, but his team fell one yard short as then St. Louis Rams linebacker Mike Jones tackled Titans receiver Kevin Dyson as time expired to seal a 23-16 victory.

Fisher parted ways with the Titans following the 2010 season after 16 seasons as the head coach. After signing with the Rams in 2012, the team has struggled with penalties and on offense.

In his first year as the Rams head coach, Fisher led the team to a 7-8-1 record, which was a five-win improvement from the previous year. But since then, the team went on to have records of 7-9, 6-10 and 7-9 as they missed the playoffs every year under Fisher.