The Anti-Defamation League reported a nearly 50% jump in possible anti-Semitic incidents since the conflict in Israel broke out.
KABC
By Rob Hayes 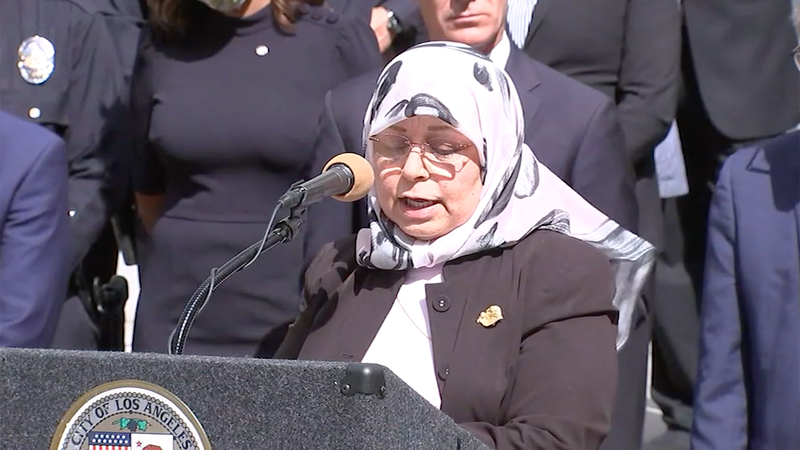 LOS ANGELES (KABC) -- Local leaders are calling for tolerance as tensions in the Middle East between Israel and Palestine appear to be spilling over in Southern California, with at least two attacks against Jewish people in Los Angeles.

The Los Angeles Police Department held a news conference Thursday to get that message across, bringing together leaders of the city's Jewish and Arab communities.

"Go to synagogue, when the service is over do not remove your tallit, wear it all the way home," said Rabbi Abraham Cooper from the Simon Wiesenthal Center.

Hedab Tirifi, with the Islamic Center of Southern California, said the violence occurring against Jewish bystanders on the streets of L.A. is "not acceptable."

"It doesn't further the Palestinian cause, or any cause," she said.

The call for peace comes after instances of local violence. Investigators are looking into two attacks against Jews in L.A.

In one incident, two cars bearing Palestinian flags chased a man as he was walking to his synagogue on La Brea Boulevard on Tuesday.

He described the scare to Eyewitness News, but wanted to remain anonymous.

"All along they were screaming 'Allah Akbar, Allah Akbar'," he said. "I was able to get in the synagogue and just lock the door behind me. This was the scare of my life."

Another incident occurred on the same night on La Cienega Boulevard. Disturbing video shows an apparent group of pro-Palestinian protesters attacking diners outside a restaurant in the West Hollywood area.

Dep. Chief Dominic from the LAPD said at the conference that the department will treat both incidents as hate crimes.

The Anti-Defamation League, a leading Jewish anti-hate organization reported a nearly 50% jump in possible anti-Semitic incidents since the conflict in Israel broke out, with 193 reports in the week after the crisis began, compared to just 131 reports in the previous week.

According to a 2021 ADL survey, 63% of Jewish Americans experienced or witnessed some form of anti-Semitic incident in the last 5 years, and more than half said they feel Jews are less safe in the U.S. today than they were a decade ago.

In the meantime, the pro-Palestine group Jewish Voice for Peace held a vigil Thursday night in Santa Monica. They mourned the more than 200 Palestinians killed in the recent conflict with Israel.