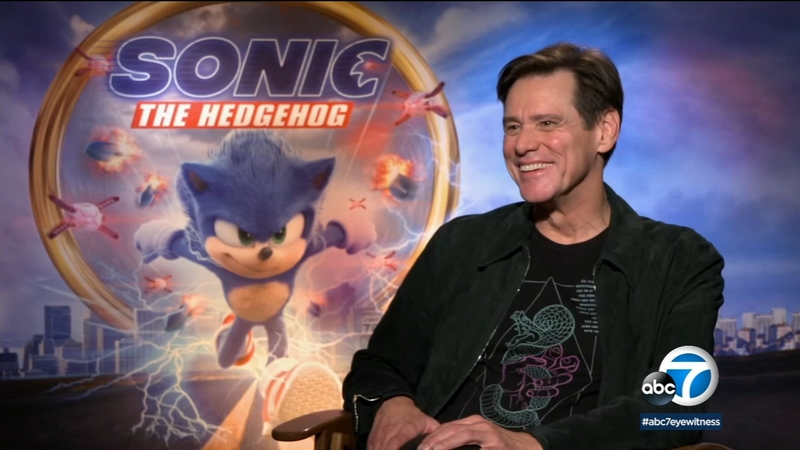 LOS ANGELES (KABC) -- We haven't seen Jim Carrey on the big screen for a few years.

He's back this week in a family film based on a blockbuster videogame franchise. "Sonic The Hedgehog" is now a movie.

Carrey plays the evil villain Dr. Ivo Robotnik, a man who wants to control the world. Sonic has come to live a peaceful life on Earth - but the not-so-good doctor isn't having it.

If he can capture Sonic, it will help him achieve world domination.

Carrey says it's a lot of fun to play "bad."

"Are you kidding me? I gotta be good all the time. You know, it's like, just let out the horses, man! You know what I mean? I'm a wild mustang!" said Carrey.

"It's not only good to play but it's really fun to just do something lighthearted and insane for a while, because I've been into some heavy stuff. And just kind of feeling that freedom, that dance again, you know, that dance - l like being that comedic Fred Astaire almost."

The Sonic fans who initially played the game back in the day were top of mind for Carrey.

"I want to entertain them, too. And of course I want the kids," said Carrey. "One of the great thrills of some of the work I've done is that it has re-introduced itself to new generations."

One of Carrey's other interests these days is his art.

Much of it is political, but not all of it. A favorite is one he drew from a 1930s photo of his late father, who grew up poor but was rich in other ways.

"He's standing there with a tattered sweater and his pet rat. And that pretty much says it all. My dad was a character like no other," said Carrey. "If you talked to him for five minutes, you've known him for 50 years. And he was best friends with whoever he glanced at. He was a lovely man."