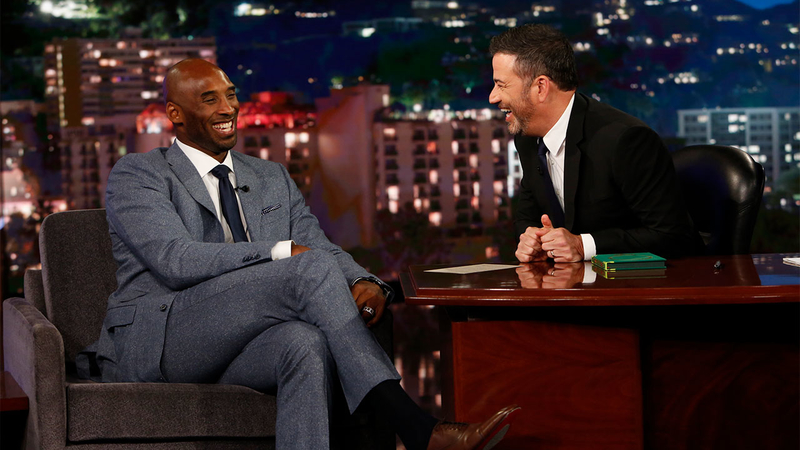 During the hour, Jimmy looked back at some of those conversations, including appearances after Kobe won NBA Championships and Olympic Gold.

To start the broadcast, Jimmy, holding back tears, remembered Kobe in a monologue transcribed below, describing the legacy the NBA legend leaves behind:

"Hi. I'm Jimmy Kimmel. And tonight's show is going to be different from our usual show. We don't have a studio audience here tonight because going forward with a comedy show didn't feel right considering what happened yesterday. So I'd like to just speak to you directly.


"As you undoubtedly know, Kobe Bryant and his daughter Gianna and seven of their friends were killed in a helicopter crash yesterday here in Los Angeles. And that was a punch in the gut for many of us. Kobe was - and I know this might not make sense - but he was just the last person you could ever imagine something like this happening to.

"He was so strong and handsome and smart and energetic. He was a hero. And when I say that I don't mean a hero like real heroes like firefighters or doctors and nurses who actually save lives; I don't mean to compare what he did for a living to what they do. I know there are more important things than basketball, almost everything is more important.

"But Kobe was hero in the way Superman is a hero. He was so big, it was almost like he was a fictional character. He was a real-life superhero with a costume and everything walking amongst us. Those of us who love the Lakers know it seemed like he was always came through, he always showed up to save the day. He wanted to save the day. He had a force of will. He never gave up.

"As an athlete, he was incredibly gifted, more than almost anyone. He was talented beyond reasoning. Yet he worked harder than everyone. He worked harder than people with much less talent than he had. He took his job and his pursuit of excellence so seriously. He was completely dedicated to being as good as he possibly could be, which is inspiring to anyone who does anything, and we loved him because of that.

"But we also loved him because he was ours. We watched him grow up here. He came to LA when he was a teenager and, unlike almost every other superstar athlete, he never left. In his 20-year career, he only wore two uniforms, for the Lakers and for the United States Olympic Team.

"There were times when it seemed like he would leave, but he didn't. He stayed until the end. And he's someone almost everyone in the city loved and not just Lakes fans. Everyone would light up when they saw him. I saw it many times.

"He was special. He was a special person. A great basketball player, for sure, but more than that. He had so many interests outside of sports. He was intensely curious. He would call people he admired to interview them. Business leaders, writers, inventors. He was always learning, always improving. He had a hunger for that.

"When he was injured, when he tore his Achilles, I sent him a book and, to my surprise, he read it and then called me to discuss it in maniacal detail. He wanted to know everything about it. And I was like, 'I don't know, Kobe. I didn't write it, I just bought the book.' I had to put him in touch with the guy who wrote the book. And that's what he was like.

"I had many conversations with Kobe off of television and they always involved his daughters. Always. Once he retired form basketball, his life revolved around their lives. He was very proud of them. He loved being a father.

"When my son had heart surgery, he checked in with me repeatedly. He made a point once Billy, my son, was out of the hospital to meet him. He wanted to meet him. And, from time to time, he would check in to see how he was doing.

"And, yes, I know he was not a perfect person. I understand that. My intention is not to canonize him or make judgements about things I don't know anything about. But I will say he loved his family, he worked very hard, and he brought a lot of joy to a lot people in this city and we're going to miss him.

"And I hope you will pray for his daughter, Gianna, and for their mother, Vanessa, for the three girls Kobe left behind who lost their father and their sister, and for his friends who were on that flight with him, the Altobelli family, Christina Mauser's family, the Chester family, Ara Zobayan, the pilot. I can't imagine how much they are missed.

"This was a terrible loss for those families and for the Lakers, for Kobe's teammates, for his fans. It's just - there's no silver lining here. It's all bad. It's all sad.

"He was a bright light and that's how I want to remember him.

"He was on the show 15 times. We had many fun and interesting conversations. And tonight we are going to share some of those to remember him, starting with what turned out to be the last interview I got to do with him from September of last year."