More than two-thirds of Americans approve of Biden's approach to the pandemic.
ABCNews
By Kendall Karson 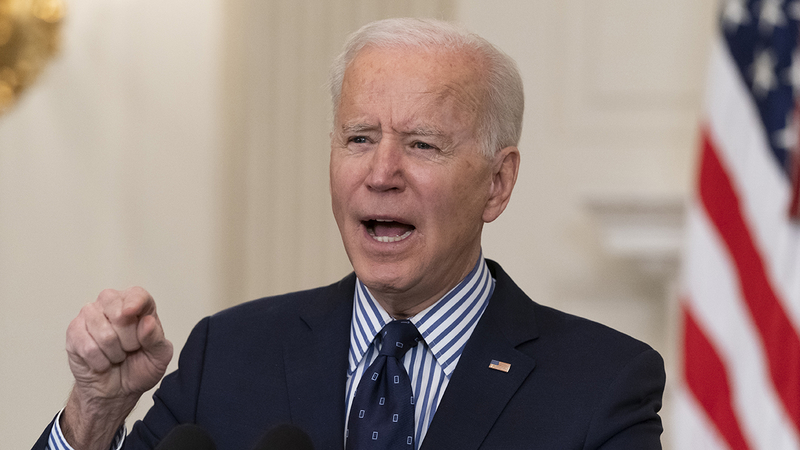 'Help is on the way:' Biden speaks after Senate passes COVID bill

WASHINGTON -- President Joe Biden retains broad support for his coronavirus response, though the country appears to be wary of aggressively loosening restrictions aimed at curbing the spread of the virus, according to a new ABC News/Ipsos poll.

On the cusp of scoring his first major legislative achievement, more than two-thirds of Americans (68%) approve of Biden's approach to the pandemic -- a consistent result since he took office in January. At a moment of deep political polarization, his steady approval is also reinforced by positive marks from 35% of Republicans, 67% of independents and an overwhelming 98% of Democrats in the poll, which was conducted by Ipsos in partnership with ABC News using Ipsos' KnowledgePanel.

The solid backing of the president's coronavirus response comes as Congress pushes forward on Biden's sweeping $1.9 trillion coronavirus relief bill, which passed the evenly divided Senate along a party-line vote on Saturday. The package, which will provide relief to lower-income Americans, small businesses, schools and state and local governments, must now pass the House before it heads to Biden's desk.

With Democrats controlling both chambers in Congress, the far-reaching federal measure is expected to be taken up by the House as early as Tuesday, despite strong Republican opposition. As Biden pushes to bolster the government's response to the health crisis and inject federal resources into the battered economy, some states are taking steps to rescind efforts aimed at combatting the health crisis, such as removing mask mandates and reducing capacity limits for businesses.

Republican state leaders in Texas and Mississippi announced plans earlier this week to end statewide requirements for masks and allow businesses to operate at full capacity, even as health experts, including Dr. Anthony Fauci, cautioned against reopening too quickly.

"It is now time to open Texas 100%," Texas Gov. Greg Abbott said at a press conference Tuesday, even though the threat of the virus and highly transmissible variants persist in the state.

More Americans think loosening mask mandates and restrictions on public gatherings is happening too quickly, 56% and 50% respectively, compared to only about 1 in 4 who believe it's happening too slowly, 22% and 26% respectively. About 1 in 5 Americans view the loosening of mask mandates (21%) and public gathering restrictions (24%) as occurring at the right pace.

The views on the country's pace for both revoking restrictions and reopening fall sharply along party lines, with Republicans far more likely than Democrats and independents to see the approach as too slow.

While clear majorities of Democrats (87%) and independents (55%) think the loosening of mask mandates is taking place too quickly, only 25% of Republicans say the same. Republicans are less unified on this issue as Democrats, with 49% believing this is happening too slowly and only 4% of Democrats and 17% of independents agreeing. The results by partisanship are similar on the question of loosening restrictions on public gatherings.

The discord over reopening shuttered schools has underlined the complexities of outlining a safe pathway back to normal, with teachers and staff urging vaccinations and better mitigation protocols before opening up classrooms.

President Joe Biden said Tuesday that the U.S. expects to take delivery of enough coronavirus vaccines for all adult Americans by the end of May, two months earlier than anticipated, as his administration announced that drugmaker Merck & Co. will help produce rival Johnson & Johnson's newly approved shot.

Nearly 3 in 10 Americans (28%) said they have already received at least one dose of the vaccine in the poll, which, similar to other recent surveys, likely slightly overstates the number of Americans who have been vaccinated, according to the Centers for Disease Control and Prevention. The most recent CDC report, which could lag actual vaccinations by a few days, shows that 22.5% of the adult population has received at least one dose.

More than half of those surveyed in the poll (55%) say they have not attempted to schedule an appointment to receive a vaccine, while 15% say they have tried but so far have been unable to secure one. Those who are unsuccessfully trying to obtain a vaccine, numerically, are more likely to be Democrats, more likely to be concerned about contracting the virus, and think reopening is happening too quickly.

Among those who have sought to get a vaccine appointment or have successfully been vaccinated, there is a near-even break in their view of the difficulty of the process: 51% view it as not difficult, while 48% say it is difficult.

Even with vaccine distribution underway, Americans are still similarly concerned about contracting the coronavirus as they've been throughout nearly a year of polling. Almost three-fourths of Americans (72%) are concerned that they or someone they know will be infected with the virus. However, high-level concern is down somewhat since the last time this question was asked in October. Now, 27% say they are very concerned compared to 36% in October.

Concern persists even among those who have received at least one dose of the vaccine, with 84% still worried about the spread of the virus for either themselves or someone they know.

This ABC News/Ipsos poll was conducted by Ipsos Public Affairs' KnowledgePanel March 5 to 6, 2021, in English and Spanish, among a random national sample of 521 adults. Results have a margin of sampling error of 4.8 points, including the design effect. Partisan divisions are 31-26-36%, Democrats-Republicans-independents. See the poll's topline results and details on the methodology here.