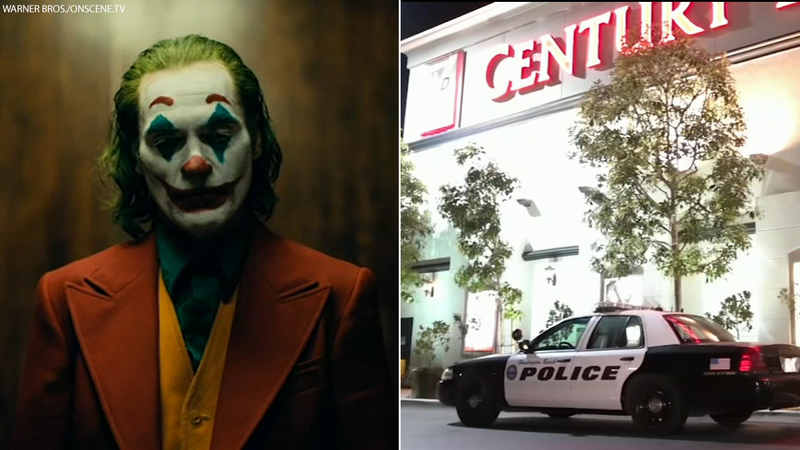 HUNTINGTON BEACH, Calif. (KABC) -- A Huntington Beach movie theater reopened Friday with heightened security after receiving a threat associated with the showing of the film "Joker."

Fans were turned away from seeing "Joker" Thursday at the Century theater in the 7700 block of Edinger Avenue amid a police presence at the location after officers responded around 5:30 p.m.

Huntington Beach police did not confirm the threat, which was deemed credible, was related to the "Joker" film, saying the decision to close early was made by the movie theater.

Details regarding the threat were not disclosed and no arrest has been made.

Customers who purchased tickets for a 10:30 p.m. showing of the "Joker" were turned away.

"As we were walking in, we see all the police and stuff, it's kinda weird," moviegoer Stephanie Theroux said. "We don't know specifically what it was, we just know something's going on."

As theaters across the country show the R-rated film, which grossed $13 million its opening night, some are increasing security following concerns of threats on social media.

Some national movie theater chains have upped security with the release of "Joker."

The movie focuses on a man who finds his purpose in committing acts of violence. The movie makes the villain, played by Joaquin Phoenix, the hero and is expected to perform well at the box office.

Some national chains have heightened security and banned masks from being worn by attendees of the psychological thriller.

In 2012, James Holmes who dyed his hair orange to look like the Joker, killed 12 people in a mass shooting at a midnight screening of another Batman movie, "The Dark Knight Rises," in Aurora, Colorado.

The FBI said the threats on social media, which date back to May of this year, are not credible and no specific theaters have been mentioned.