Joshua Tree couple, whose kids were found living in box, released from custody 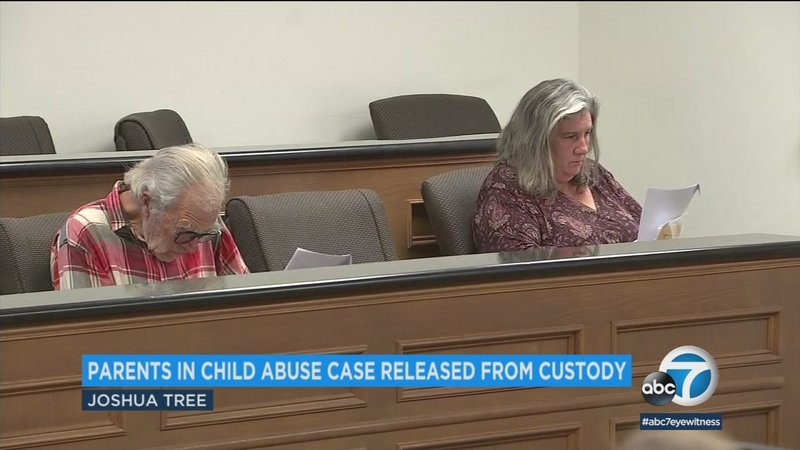 IE couple, whose kids were found living in box, released from custody

JOSHUA TREE, Calif. (KABC) -- The Joshua Tree couple accused of raising their three children in squalor have been released from custody.

According to public defender Elizabeth Crabtree, the District Attorney has determined Mona Kirk, 51, and Daniel Panico, 73, are not a flight risk or a danger to the community.

Authorities arrested them last week after finding the family living in a ramshackle wooden shed with no running water or electricity.

Investigators said the children -- ages 11, 13 and 14 -- had been living out in the middle of the desert for the last four years.
EMBED More News Videos

A Joshua Tree couple was arrested after San Bernardino County sheriff's deputies found their three children had been living in a large box for years.

Kirk would sleep alongside them in the ramshackle dwelling, which is only about 4 feet high and 10 feet wide, said Cindy Bachman, spokeswoman for the San Bernardino County Sheriff's Department. Panico slept either in a trailer on the property with dozens of cats or in another vehicle, she said.

Deputies found the children while conducting a wellness check last Wednesday morning. The children didn't appear to have any obvious injuries and showed no outward signs of malnutrition but were undergoing medical evaluations, Bachman said.

Children and Family Service responded to the location and took custody of the children.

After Friday's arraignment, several of the couple's friends spoke to the media to vouch for them. They said Kirk and Panico are not criminals - they're just homeless.

Neighbor Mike Reynolds said the couple lost their home in the recession, but they owned the land where they were living.

"I don't think they're criminals at all. They're a family doing the best they could to survive," Reynolds said.

Friends also said the children built the box, which they called a "fort," themselves, and were very proud of the structure. In fact, they said the kids enjoy sleeping there.

In addition, the friends emphasized that the children were not held against their will. They described the kids as being happy, and that they would often go to the library.