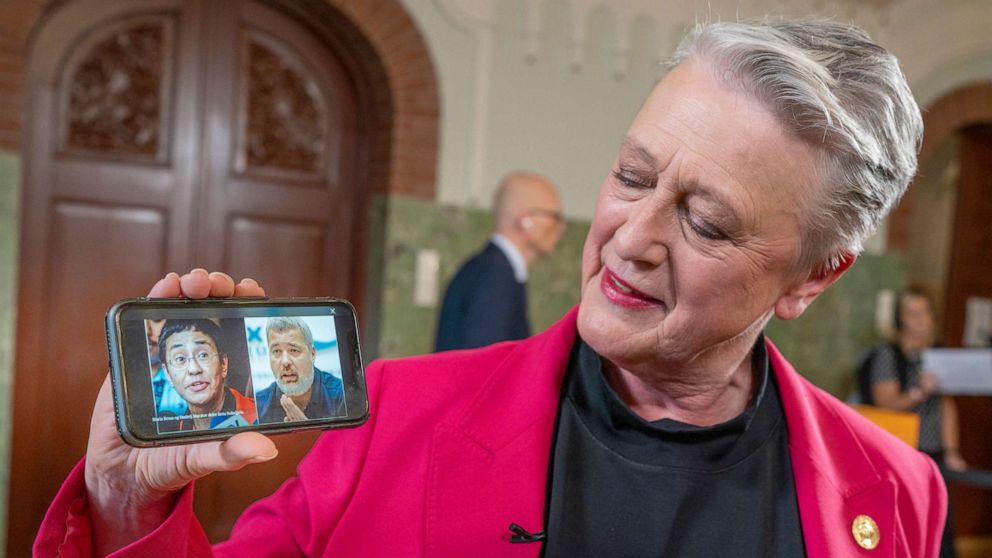 The Norwegian Nobel Committee, which is responsible for selecting the Nobel Peace Prize recipients each year, decided to award this year's prize to both Ressa, of the Philippines, and Muratov, of Russia, "for their efforts to safeguard freedom of expression, which is a precondition for democracy and lasting peace."

Along with the notoriety, they will receive gold medals and share a cash award of 10 million Swedish krona, or about $1.14 million.

The Norwegian Nobel Committee praised Ressa and Muratov for being "representatives of all journalists who stand up for this ideal in a world in which democracy and freedom of the press face increasingly adverse conditions."

"Maria Ressa uses freedom of expression to expose abuse of power, use of violence and growing authoritarianism in her native country, the Philippines," the committee said in a statement Friday. "Dmitry Muratov has for decades defended freedom of speech in Russia under increasingly challenging conditions."

Ressa, 58, co-founded the Philippines-based online news site Rappler in 2012. As a journalist and Rappler's CEO, she "has focused critical attention" on Philippine President Rodrigo Duterte's controversial policies, including his "murderous anti-drug campaign," according to the Norwegian Nobel Committee.

"The number of deaths is so high that the campaign resembles a war waged against the country's own population," the committee said. "Ms. Ressa and Rappler have also documented how social media is being used to spread fake news, harass opponents and manipulate public discourse."

Ressa has been the target of multiple arrests and an online hate campaign after publishing articles critical of the Duterte regime. She was named a 2018 Person of the Year by TIME magazine.

In a speech at the United Nations General Assembly in New York City in 2019, Lebanese-British human rights lawyer Amal Clooney described Ressa, her client, as "a Filipino journalist who stands at 5 foot 2 but stands taller than so many of us in her courage and personal sacrifice for the cause of telling the truth."

Muratov, 59, co-founded the independent Russian newspaper Novaya Gazeta in 1993. He has been the paper's editor-in-chief since 1995. Novaya Gazeta, with Muratov at its helm, "is the most independent newspaper in Russia today, with a fundamentally critical attitude towards power," according to the Norwegian Nobel Committee.

"The newspaper's fact-based journalism and professional integrity have made it an important source of information on censurable aspects of Russian society rarely mentioned by other media," the committee said. "Since its start-up in 1993, Novaja Gazeta has published critical articles on subjects ranging from corruption, police violence, unlawful arrests, electoral fraud and 'troll factories' to the use of Russian military forces both within and outside Russia."

For years, Novaya Gazeta has been one of the few national news publications in Russia to report critically on Russian President Vladimir Putin, conducting in-depth and dangerous investigations into the regime's alleged human rights abuses and corruption. In 2007, Muratov won an International Press Freedom Award from the Committee to Protect Journalists for his work as the "driving force" behind Novaya Gazeta.

Both Muratov and his Novaya Gazeta are seen as bastions of Russia's besieged free press. Since the newspaper's founding, six of its journalists have been killed, including investigative reporter Anna Politkovskaya, who was gunned down in the elevator of her Moscow apartment building on Putin's birthday in 2006. Novaya Gazeta's journalists continue to receive threats for their coverage.

"Despite the killings and threats, editor-in-chief Muratov has refused to abandon the newspaper's independent policy," the Norwegian Nobel Committee said. "He has consistently defended the right of journalists to write anything they want about whatever they want, as long as they comply with the professional and ethical standards of journalism."

"He has consistently worked in accordance with his ideals, he has adhered to his ideals, he is talented and brave," Peskov told reporters in Moscow on Friday. "It's a high appraisal and we congratulate him."

The Norwegian Nobel Committee said freedom of expression and freedom of information are "crucial prerequisites for democracy and protect against war and conflict," and that the award of the prestigious prize this year to Ressa and Muratov "is intended to underscore the importance of protecting and defending these fundamental rights."

"Free, independent and fact-based journalism serves to protect against abuse of power, lies and war propaganda," the committee added. "Without freedom of expression and freedom of the press, it will be difficult to successfully promote fraternity between nations, disarmament and a better world order to succeed in our time."

Members of the press have been Nobel Peace Prize recipients since as early as 1907, when Italian journalist Ernesto Teodoro Moneta won "for his work in the press and in peace meetings, both public and private, for an understanding between France and Italy." The prize that year was also given to French jurist Louis Renault "for his decisive influence upon the conduct and outcome of the Hague and Geneva Conferences."

Last year's Nobel Peace Prize was awarded to the World Food Program, the food-assistance branch of the United Nations, "for its efforts to combat hunger, for its contribution to bettering conditions for peace in conflict-affected areas and for acting as a driving force in efforts to prevent the use of hunger as a weapon of war and conflict."

Peace was the fifth and final prize category that Swedish inventor and scholar Alfred Nobel mentioned in his last will and testament. He left most of his fortune to be dedicated to the series of awards, the Nobel Prizes.

The Nobel Peace Prize is awarded annually to "the person who shall have done the most or the best work for fraternity between nations, for the abolition or reduction of standing armies and for the holding and promotion of peace congresses," as described in Nobel's will.

All Nobel Prizes are awarded in Stockholm, Sweden, except for the Nobel Peace Prize, which is presented in Oslo, Norway.

Only one person has declined the Nobel Peace Prize: Vietnamese politician Le Duc Tho, who was awarded the prize in 1973 with former U.S. Secretary of State Henry Kissinger for negotiating the Vietnam peace agreement.