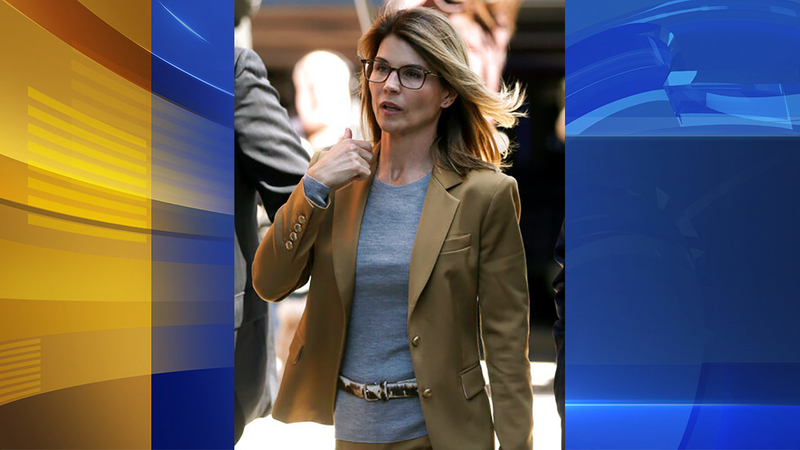 Lori Loughlin, husband due in court

BOSTON -- Actress Lori Loughlin and her fashion designer husband, Mossimo Giannulli, will be able to continue using a law firm that recently represented the University of Southern California, which is an alleged victim in the sweeping college admissions bribery case, a federal judge allowed Tuesday.

But Magistrate Judge M. Page Kelley declined to rule on a different potential conflict of interest in the couple's legal representation and said she would decide later, calling it more serious.

Giannulli, who created the Mossimo clothing brand, and Loughlin, who starred on TV's "Full House," mostly sat quietly through the brief proceedings in Boston federal court.

They spoke up only to answer a series of short answer questions from the judge, acknowledging they each understood the legal risk of retaining the firms and the risks of being represented by the same firm. Neither commented after the hearing.

The couple are accused of paying $500,000 to have their two daughters labeled as recruits to the USC crew team, even though neither participated in the sport. They have pleaded not guilty to charges of conspiracy to commit fraud and money laundering.

Lawyers for the Los Angeles-based Latham & Watkins law firm, which Loughlin and Giannulli have retained for representation, said Tuesday that it represented USC in an unrelated real estate case that had been handled by different lawyers.

Prosecutors had argued that retaining the firm could pose a serious conflict, especially if the firm's lawyers questioned USC officials at trial or gathered information from the university during the case's discovery phase.

But in court Tuesday, Assistant U.S. Attorney Eric Rosen acknowledged that USC, as of this month, was no longer a client.

Instead, he argued, there is a potentially greater conflict with Giannulli's additional counsel from the firm Donnelly, Conroy & Gelhaar.

The firm represents Davina Isackson, who, along with her husband, California real estate developer Bruce Isackson, has pleaded guilty to paying $600,000 in shares of stock to get their daughters into USC and the University of California Los Angeles.

They are one of the few parents cooperating with prosecutors.

"I don't really see how it could work," Rosen said.

George Vien, an attorney for the firm, said it is prepared to take steps to prevent conflicts of interest, such as not cross-examining Isackson in the unlikely event she is asked to testify in Giannulli's case.

Judge Kelley said she would decide later on that potential conflict, a type that is "typically considered to be the most serious."

"This is the situation where judges most often remove lawyers from cases, if they are representing someone who is cooperating against another person," Kelley told Giannulli.

At least four other parents have also hired law firms that work for USC, and at least two have chosen lawyers that have done work for Georgetown University, another alleged victim.

So far, such arrangements have generally been allowed as long as parents are aware of the potential conflicts.

Tuesday's hearing was just the second court appearance for Loughlin and Giannulli following an initial briefing April 3. They join 17 other parents fighting federal charges in the bribery case.

A total of 51 people have been charged in the case, which prosecutors say is the biggest admissions scandal ever prosecuted in the U.S. It involves prestigious schools across the country and has also embroiled prominent college coaches.

Many of the parents are accused of paying an admissions consultant to bribe coaches in exchange for helping their children get into schools as fake athletic recruits.

Some others paid the consultant to bribe exam administrators to allow someone else to take tests for their children, authorities say.
Report a correction or typo
Related topics:
collegebriberyu.s. & world
Copyright © 2021 by The Associated Press. All Rights Reserved.
More Videos
From CNN Newsource affiliates
TOP STORIES