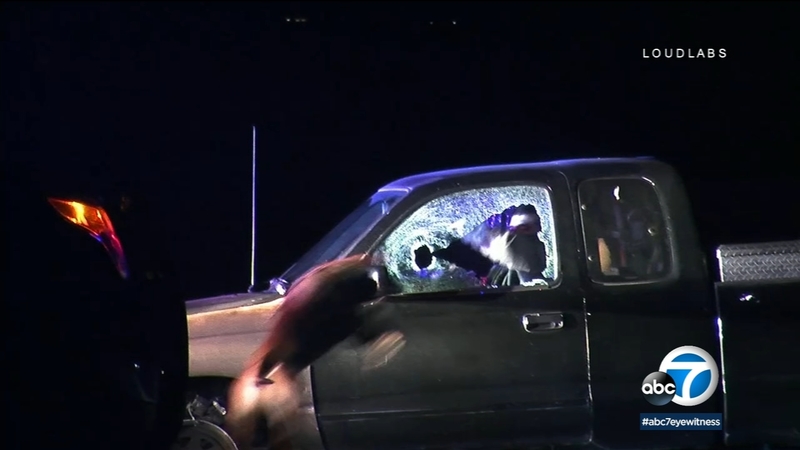 The value of having highly trained K-9 officers on a police force was dramatically illustrated in two separate SoCal incidents on Friday.

In one incident, a Corona K-9 made like a superhero and leaped through a shattered truck window to subdue a stalking suspect after a lengthy police chase.

And in another, a K-9 took down a pursuit suspect in Rancho Cucamonga quickly as he was trying to enter a medical building.

When a pursuit comes to an end, but the suspect won't get out of his vehicle - it can often be too dangerous for law enforcement to approach.

Early Friday morning in Fontana, the Corona Police Department's Duke was unleashed on a stalking suspect and the dog literally flew to the rescue.

His handler says Duke is well-trained and enthusiastic about his work.

"He knew what was going on. He wanted me to let go sooner than I did. He's barking, showing me he has target ID and he wants to do his job."

The suspect, 31-year-old Julio Vasquez, led police on nearly an hour chase that ended with the use of a spike strip and PIT maneuver. Duke was able to disable Vasquez immediately so officers could take him into custody.

"The training that we always do every week is almost the same scenario we do every week minus the glass. I knew before letting go of the leash Duke would perform," Neff said. "I just didn't know he was going to come in that car so hot."

Duke was not hurt and is back to work.

Also on Friday, a K-9 took down a pursuit suspect in Rancho Cucamonga before he could enter a medical office. That was after a lengthy chase through Los Angeles and San Bernardino counties.

During the chase, officers ran the plate and learned the vehicle had been reported stolen. After about an hour the suspect exited the freeway and drove into a Rancho Cucamonga medical complex -- where police took him into custody with help from the K-9 officer.

Earlier this year, a K-9 was used by the Los Angeles County Sheriff's Department after a high-speed pursuit of a murder suspect ended in a shootout in Vernon.

Former Los Angeles County Sheriff Jim McDonnell says a well-trained dog can save the life of an officer.