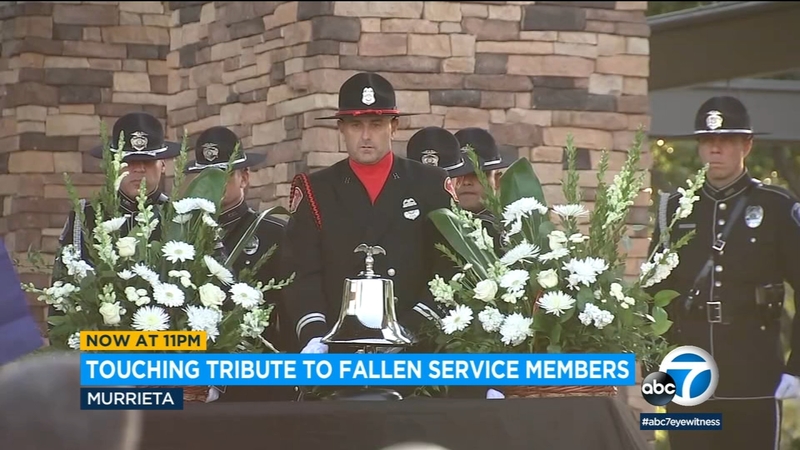 MURRIETA, Calif. (KABC) -- Hundreds of people attended an emotional memorial in Murrieta to honor the service men and women who died in the attack on the Kabul airport.

Three of the Marines who died were from the Inland Empire and a fourth lived in Orange County.

A bell was tolled 13 times to honor each of the lives lost.

"It hit home," said Murrieta resident Ron Rodriguez. "All my fellow vets. People need to understand. Don't disrespect the flag. Ths country is made up of everybody and that's what everyone sacrificed for, for this country."

Inland Empire Marines killed in the attack were: Kareem Nikoui, 20, of Norco, Hunter Lopez, 22, of La Quinta, and Dylan Merola, 20, of Rancho Cucamonga.

"Anyone that has kids knows what it would be like to say goodbye to a child," said Sharon Van Druff of Canyon Lake. "I think it would probably be one of the hardest things that would ever happen."

Another ceremony is planned for Thursday in Rancho Cucamonga to honor Merola.

The Pentagon released the names of the 13 service members killed at the Kabul airport, and families are speaking out about their heartbreak.

Shortly after the last U.S. servicemember left Afghanistan, the Taliban moved in to take full control of the airport and a hanger full of vehicles and aircraft which the Pentagon says were left inoperable.

As the Taliban declares victory, work continues to get up to 200 Americans left behind out.

Facing a barrage of criticism over the chaotic and deadly evacuation the president is defending his decision to pull out all US troops.

"We were left with a simple decision," Biden said. "Either follow through on the commitment made by the last administration and leave Afghanistan. Or say we weren't leaving and commit another tens of thousands of troops going back to war."