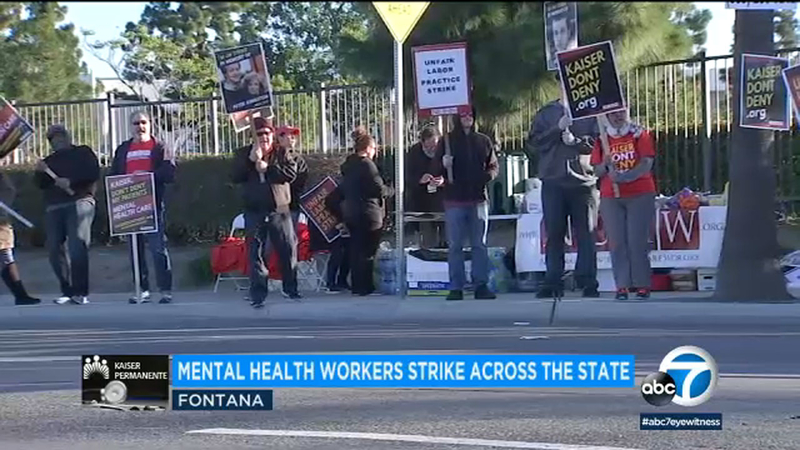 LOS ANGELES (KABC) -- Thousands of workers went on strike Monday outside Kaiser Permanente hospitals across California as they fight for changes on mental health care.

They say they will strike for five days beginning Monday and say they won't back down without a fight.

White is one of thousands of local health care workers who are taking a stand against Kaiser Permanente.

Thousands of workers plan to go on strike outside Kaiser Permanente hospitals across California starting Monday morning as they fight for changes on mental health care.

"As a social worker my whole life has been dedicated to helping people and helping systems, and Kaiser has a system that's broken," White said. "It has the resources to do it, and we're going to stand up to them and we're going to fight this fight until we win."

The group consists mainly of mental health workers from the National Union of Healthcare Workers. They're demanding better mental care for their patients, like urgent psychiatric services, evidence-based treatments and a more reasonable work environment.

There are more than 4,000 workers from facilities in Los Angeles, Orange County, Sacramento and San Francisco.

They say that patients are seeing long wait times in between appointments. So that a person with significant mental-health issues may have an initial appointment to explain their problems and then have to wait a month or more for the therapy to begin.

"During that initial appointment is where they're literally pouring their heart out to you, telling you what they need and why they're here," said Vanessa Carrillo, a developmental case manager. "And you have to sit there and tell them I hear you and I support you and you're so courageous for coming here and getting your support, but you're gonna have to wait for two months to actually start the treatment."

The group went on strike last December and still didn't have an agreed-upon contract.
Kaiser Permanente says they have been working with the union through an external mediator to come to an agreement.

A spokesperson for the medical group issued a statement that read, in part:

"The mediator recently delivered a proposed compromise to both sides that we are seriously considering; however, the union has rejected it and announced plans to strike instead of working through the mediated process."

Kasier's chief operating officer said all offices and facilities remain open, despite the strike, and those in need of mental-health treatment will receive service.

"A strike does nothing to help our important work to advance care, nor does it help us achieve a mutually beneficial contract, said Annie Russell, chief operating officer of Southern California Permanente Medical Group.

Kaiser Permanente also issued a statement that read in part: