Karen Bass, Rick Caruso work to get out the vote in last week of LA mayoral primary election 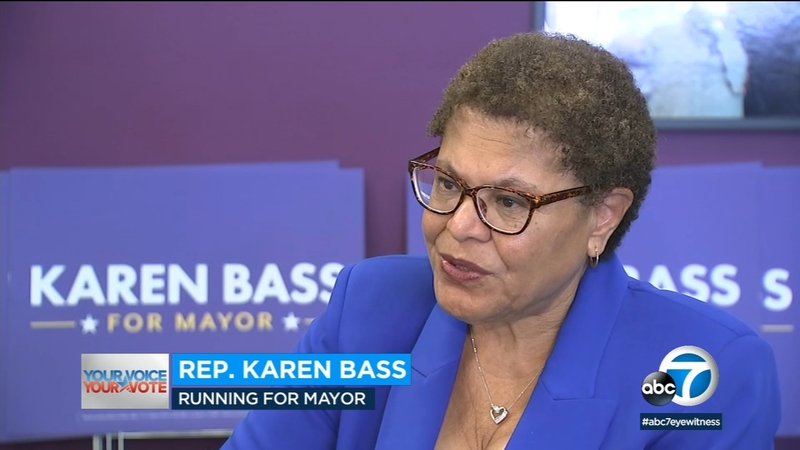 Karen Bass, Rick Caruso get out the vote in final stretch to primary

LOS ANGELES (KABC) -- Just one week from the final day of voting in the primary for the Los Angeles mayor's race and the candidates are getting out the vote.

Congresswoman Karen Bass went door to door in Baldwin Hills Tuesday, while the other candidate atop the polls, developer Rick Caruso, toured businesses in Pico-Robertson, talking with supporters at the Beverly Hills bagel company.

Eyewitness News asked Caruso about a controversial comment he made to the L.A. Times suggesting an army camp for undocumented children at the Texas border at Fort Bliss could be a good model for housing the homeless in L.A.

At her campaign headquarters in Baldwin Hills, Bass said we need to end homelessness, not construct something too quickly that only serves as a bandaid.

"That was a very difficult situation where they did contracts very quickly with people who we weren't sure if they were qualified," Bass said. "There was a lot of abuse that took place. So, I'm not really sure the comparison. Now, I didn't go to Fort Bliss, but I did go to McAllen and I don't think there was anything about those facilities that I would want to see replicated here. I actually think it was not a bright chapter in our history."

If a candidate for mayor of L.A. receives more than 50% of the vote in this election, there would not be a runoff. But, there's no evidence that will happen and Bass told us she's not concerned about the scenario.

"It is important to engage in every election. That is the minimum of what you could do as a citizen and there are things to be determined right now," Bass said. "For example, is there going to be a runoff in the mayor's race? Who's going to be in that runoff? If you wait until November, you give up your chance in having a say in this very important election,"

According to the L.A. county registrar's office, out of the 5.6 million registered voters in L.A. county, 378,500 vote by mail ballots have been returned so far.