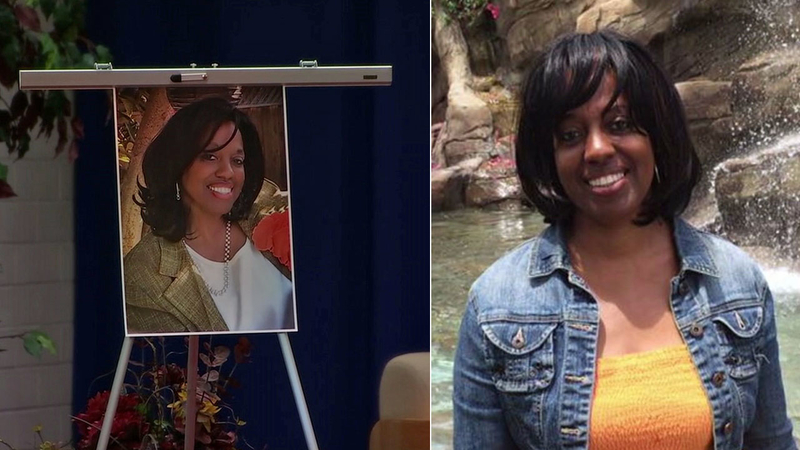 SAN BERNARDINO, Calif. (KABC) -- Friends and family held a vigil Friday in honor of Karen Smith, a special education teacher at North Park Elementary school who was killed by her estranged husband.

During the vigil, her daughter Jenny and son Adam spoke about the strong, nurturing, committed and intelligent mother they had.

"My mother was a beautiful woman, inside and out. In the end, my mother will not be remembered by this tragedy, but rather she will be remembered as a woman with a heart full of grace and soul generated by love," Adam said.

Smith, 53, was a stay-at-home mother while she raised her four children and homeschooled them, Jenny and Adam said.

Adam recalled that his mother was dedicated to helping "those most overlooked - those with special needs and the terminally ill."

The children of Karen Smith, the teacher who was killed by her estranged husband at her San Bernardino school, spoke during a vigil for her.

He said Smith would start her job at the school around 5 a.m. until the later afternoon, then go to a local hospital to take care of terminally ill kids and find time to even help children at their local church.

Jenny said Smith was her best friend and taught her to work hard. She said her mother's dedication paid off because all four of her children have at least one college degree.

"My mother is one of the most selfless people that I know. She sacrificed her time and invested it into her family," Jenny said.

She added that she and her mother got their teaching credentials together.

Smith was fatally shot by Cedric Anderson, 53, of Riverside, whom she had married in January. The couple had been together for four years before getting married, but she moved out only a few months into the marriage.

As investigators pieced together who Anderson was, his history of domestic violence came to light. He had four previous arrests between 1983 and 2013, the year he met Smith.

In addition to the arrests, court documents obtained by Eyewitness News showed Anderson had restraining orders against him and allegations of threats and domestic violence from two previous women - his first wife and a live-in girlfriend.

Authorities said Anderson showed up to the school Monday morning, told office staff he needed to drop something off for Smith and then opened fire once he got into her classroom. He killed Smith, an 8-year-old student and injured a 9-year-old student who were near her at the time.

Anderson then reloaded his revolver and turned the gun on himself.