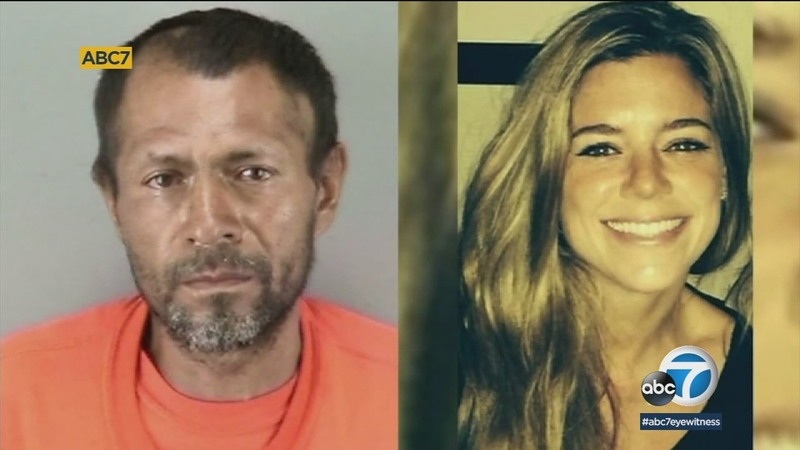 SAN FRANCISCO -- In a surprising verdict, the jury of six men and six women deliberated and came back with a not guilty verdict for Jose Ines Garcia Zarate.

The defendant was facing second degree murder charges for killing 32-year-old Pleasanton resident Kate Steinle on July 1, 2015 at Pier 14 in San Francisco. The jury only found him guilty of possession of a firearm by a felon.

While Garcia Zarate can technically walk out of the courtroom, it's expected that he will be taken into custody by immigration officials and eventually deported back to his native Mexico.

The case gained notoriety because Garcia Zarate is an undocumented immigrant who had been deported several times and had a number of felony convictions.

The Steinle family has been waiting more than two years for this day. Kate Steinle was shot and killed when she was walking with her father and a friend on the pier.

Garcia Zarate, who was homeless at the time, claimed he found the gun wrapped in a piece of cloth under a swivel chair at the pier. He said he picked it up and it accidentally fired, hitting Steinle in the back. The bullet ricocheted and then traveled 78 feet before striking Steinle, according to the defense.

The prosecution has always maintained that Garcia Zarate had the gun all along, aimed it at Steinle and fired. But because he had little experience with guns, the bullet ricocheted first, a common mistake made by amateurs.
The gun used to shoot Steinle was stolen in San Francisco from the personal vehicle of a federal park ranger four days before. The agent works for the Bureau of Land Management, and it is being sued by the Steinle family.

A number of witnesses testified in the trial, including police officers and several people who saw Garcia Zarate at the scene, along with several CSI investigators and forensic experts. The trial began on Oct. 23.

The jury had a number of choices to make. They could have gone with a second-degree verdict, involuntary manslaughter or consider a first-degree murder verdict.

Many political figures commented on the verdict after it came out, and Trump tweeted his disgust with it.

A disgraceful verdict in the Kate Steinle case! No wonder the people of our Country are so angry with Illegal Immigration.

"When jurisdictions choose to return criminal aliens to the streets rather than turning them over to federal immigration authorities, they put the public's safety at risk. San Francisco's decision to protect criminal aliens led to the preventable and heartbreaking death of Kate Steinle. While the State of California sought a murder charge for the man who caused Ms. Steinle's death-a man who would not have been on the streets of San Francisco if the city simply honored an ICE detainer-the people ultimately convicted him of felon in possession of a firearm. The Department of Justice will continue to ensure that all jurisdictions place the safety and security of their communities above the convenience of criminal aliens. I urge the leaders of the nation's communities to reflect on the outcome of this case and consider carefully the harm they are doing to their citizens by refusing to cooperate with federal law enforcement officers."
Report a correction or typo
Related topics:
californiatrialmurdercourtjudgeverdictcourt caseshootingimmigration
Copyright © 2022 KGO-TV. All Rights Reserved.
TOP STORIES
Video shows anti-masker lashing out at kids in La Crescenta
Woman says Brianna Kupfer murder suspect also chased her
Super Bowl: Every fan at SoFi Stadium to receive KN95 mask
California likely to extend paid sick leave amid COVID pandemic
Billionaire Mark Cuban launches discounted online pharmacy
UCLA student beaten, robbed on campus
LA officials combating human trafficking ahead of Super Bowl
Show More
Memorial fund honors slain LA nurse Sandra Shells
Man denied heart transplant because he has not received COVID vaccine
SoCal man, 5 others accused of sending arsenal to Mexican drug cartel
US court upholds conviction of Mexican drug lord El Chapo
CalCare: Single-payer health care in California still years away
More TOP STORIES News