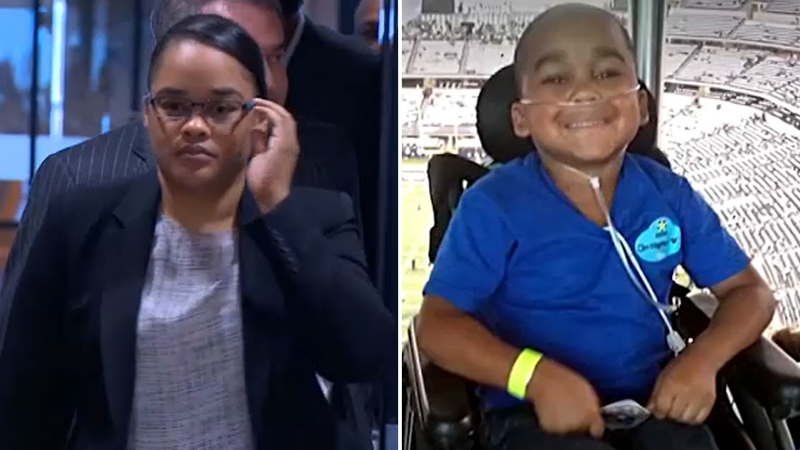 DALLAS -- A Texas woman has been sentenced to six years in prison for exposing her son to unneeded medical tests and surgeries.

Kaylene Bowen-Wright could have received up to 20 years in prison when she was sentenced Friday. She pleaded guilty in mid-August to recklessly causing injury to a child.

Investigators say Bowen-Wright subjected her son Christopher to more than 320 hospital visits and 13 surgeries over the first eight years of his life -- leaving him in a wheelchair and with a feeding tube.

She claimed he couldn't eat, had seizures, suffered from extreme fatigue, had muscular dystrophy and even told some people he had cancer.

Child Protective Services removed the boy from her care in 2017 after it was alerted by a Dallas hospital that medical staff determined he didn't have cancer or many of the symptoms Bowen reported.

The child's father is now the sole managing conservator of the now 10-year-old.

"For my own peace I forgave her a long time ago -- ultimately she has time to think about what she's done," Ryan Crawford told ABC affiliate WFAA. "It's difficult to have to go home and tell him his mother is going to prison, but his safety is what's most important."

Now questions remain on how doctors could do so many unnecessary tests and surgeries. The doctor who finally pieced it all together said it's because physicians are determined to find answers when a parent claims a child is sick.

"To say 'no you're lying' seems harsh and what if you're wrong -- so until you've exhausted every test, sometimes more than once, it's very difficult to be like, 'I'm done trying' -- no one wants to give up on a kid," Dr. Suzanne Dakil told WFAA.