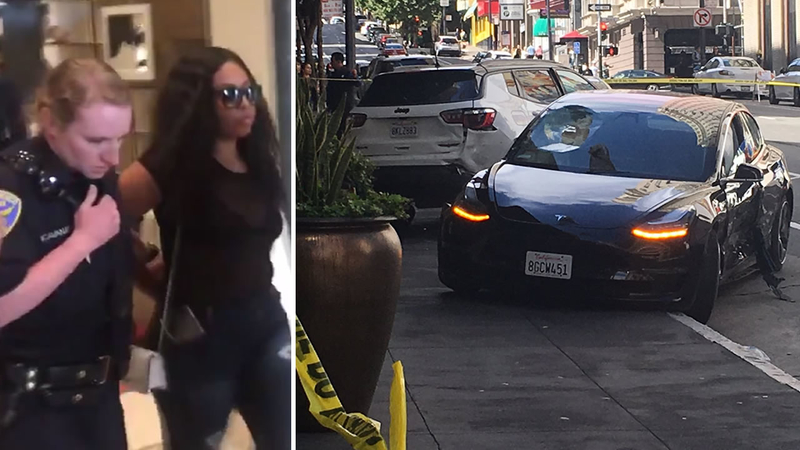 SAN FRANCISCO -- The woman allegedly responsible for hitting a couple sightseeing in San Francisco on Sunday has been identified as 21-year-old Kelsey Mariah Cambridge of Vallejo.

She's been charged with involuntary vehicular manslaughter and one count of running a red light.

The husband, 39-year-old Benjamin Dean, was killed. His wife was taken to San Francisco General Hospital, where police say her condition has improved. Kelly Dean's injuries are now non-life threatening.

Witnesses say the two were hit by the driver of a Tesla in the crosswalk after police say that vehicle ran a red light on Taylor Street at O'Farrell Street and collided with another car.

VIDEO: Woman arrested in connection with deadly SF crash (1 of 2)

Kelsey Mariah Cambridge, 21, is seen after she was arrested in connection with a crash in San Francisco that left a tourist from the Central Valley dead and his wife critically injured.

After hours of questioning, San Francisco police walked Cambridge from Hotel Spero into the back of a waiting squad car around 7:30 p.m.

Good Samaritan Bob Navarro ran to help the couple and stayed with Kelly, who was unresponsive.

"She was incoherent, gurgling noises," Navarro said. "She was on her stomach with her head off to one side. I can see a lot of blood coming from her head and we just kept talking to her, talking to her."

The couple, from the Fresno area, had spent the past few days in San Francisco celebrating their third wedding anniversary. Both worked for the Fresno County Department of Social Services, but in different offices.

SFPD says the driver of this Tesla ran a red light at O’Farrell @2pm. @SFPD says she was driving up Taylor 15-20MPH above the posted speed limit. Tesla hit the mini, then a couple in the crosswalk, then a parked SUV. Man was killed and his wife is critical - visiting from Clovis. pic.twitter.com/qLBx4LZSrP

In an email sent to employees Monday, the department said, in part, "Our thoughts and deepest sympathies are with family and friends during this difficult time."

The driver of the Telsa had rented the car from an online app called Getaround. Unlike traditional rental car companies that require drivers to be at least 25 years old, the minimum age to drive one of their cars is 19.

The company issued this statement on Monday, "We are cooperating with police and local authorities investigating this tragic incident, and are not sharing any details out of respect for the families involved and the investigation underway."

Police tell me the driver of the Tesla lives in San Francisco and was renting the Tesla. She’s not hurt and is being interviewed near the scene by police. pic.twitter.com/eZEluW5jUG

As far as the suspect is concerned, Officer Adam Lobsinger says, "We're looking into her criminal background right now, that's part of the investigation."

Police are also investigating what role, if any, the Autopilot feature on the Tesla could have played in the accident.

"All aspects of the incident are being taken into consideration and will be part of the investigation," added Lobsinger.