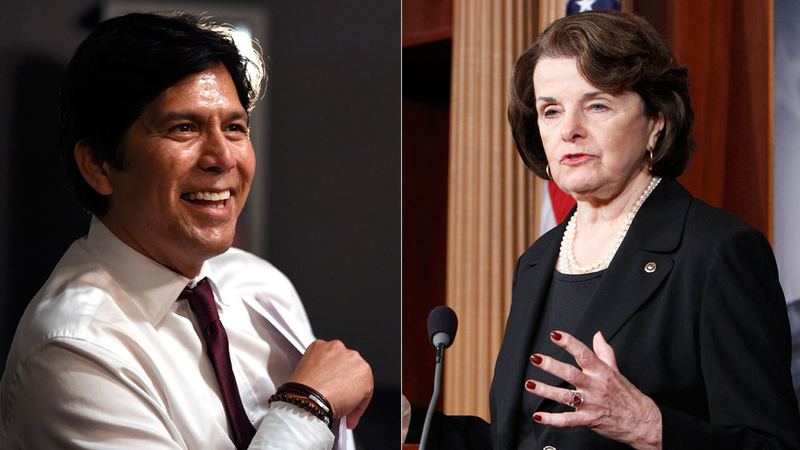 In backing de Leon, a majority of the party's 360-member executive board ignored Feinstein's calls to stay neutral in the race. Her allies had warned an endorsement in the race would create an intraparty squabble that could detract from important down-ballot races.

De Leon has long been courting party activists and appealed to those seeking a fresh face and a more progressive senator to fight against President Donald Trump.

"Today's vote is a clear-eyed rejection of politics as usual in Washington, D.C.," de Leon said in a statement after the vote. "We have presented Californians with the first real alternative to the worn-out Washington playbook in a quarter-century."

A total of 217 delegates voted for de Leon, of Los Angeles, while 22 cast ballots for Feinstein and 94 voted for no endorsement.

Party members and activists are typically more liberal than the wider California electorate that has sent Feinstein to Washington five times. Feinstein has turned skepticism from some party activists into an asset in her past campaigns.

The endorsement of de Leon means the state party will spend money promoting his candidacy this fall.

Still, Feinstein outpaces him in name recognition and cash and has a loyal following across California. She won the June 5 primary with 44 percent of the vote compared to de Leon's 12 percent.

While it's an embarrassment for California's senior senator to lose her party's official nod, it may do little to change the trajectory of the race.

California runs a top-two primary system that sends the two highest primary vote getters to the general election regardless of party. The system allowed de Leon to take the No. 2 spot by squeaking past a slew of unknown Republicans in the primary.

Six U.S. House candidates for seats considered top Democratic targets joined Feinstein's call for neutrality in a letter to members before the vote on Saturday.

"A divisive party endorsement for U.S. Senate would hurt all down-ballot candidates and our ability to turn out Democrats we desperately need to vote in November," it said.

De Leon led the state Senate until earlier this year. He is the author of California's so-called sanctuary state law that was the target of a Trump administration lawsuit. A judge recently dismissed the case.

Feinstein was first elected to the U.S. Senate in 1992, when she became the first woman to serve the state in that chamber. She is the ranking member of the Senate Judiciary Committee, where she'll take center stage this summer during the U.S. Supreme Court nomination fight.
Report a correction or typo
Related topics:
politicscalifornialos angeleslos angeles countysenateelection 2018dianne feinsteincongressional racedemocratsu.s. & worldcongresscalifornia state senate
Copyright © 2022 by The Associated Press. All Rights Reserved.
TOP STORIES
LA County could hit 'high' COVID level in July, prompt return of masks
Here's what to know about the end of CA's eviction moratorium
California late start law aims to make school less of a yawn
LAX expected to be second busiest US airport over July 4th weekend
Woman searching for brother reported missing in Redondo Beach
Lawyer: Nipsey Hussle lifted up neighborhood he was gunned down in
Apple's newest CarPlay feature will make buying gas easier
Show More
How to save money when buying a new car in an inflated market
Orange County confirms 1st presumptive case of monkeypox
OC woman attacked and sexually battered inside Irvine storage facility
Silver Lake restaurant offers free food in exchange for Sriracha
USC, UCLA moving from Pac-12 to Big Ten in 2024
More TOP STORIES News