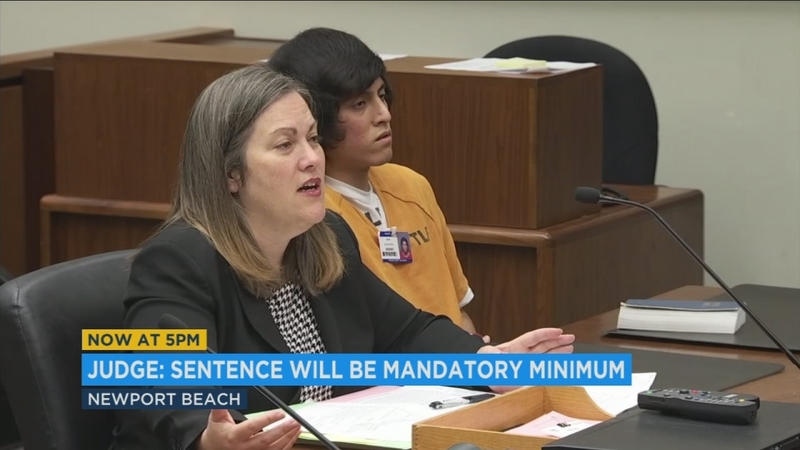 SANTA ANA, Calif. (KABC) -- Sentencing for an Orange County man convicted of sodomizing a 3-year-old relative was delayed until Jan. 12.

During the hearing Friday, Judge Marc Kelly made himself clear to Kevin Rojano-Nieto and his public defender. The judge plans to sentence him to the mandatory minimum sentence for his crime.

"I don't want to mislead the defense or Mr. Rojano, he is going to be sentenced to 25 years to life," Kelly said.

On June 4, 2014, a then 19-year-old Rojano-Nieto was playing video games in the garage of his Santa Ana home when the little girl he is related to wandered into the area.

At some point, he became sexually aroused by the toddler, pulled her pants down and assaulted her, according to officials at the Orange County District Attorney's Office.

During the assault, the girl's mother was looking for her and attempted to get into the garage, but it was locked. The mother then searched for her daughter in a neighbor's home. Rojano-Nieto is said to have put his hand over the girl's mouth to keep her from crying for her mother. He then made the toddler touch his penis.

"We're at a point where we need to have finality of the case and so that's where we're trying to get things going," said Matt Lockhart, senior deputy district attorney with the Orange County District Attorney's office.

In 2015, Judge Kelly sentenced Nieto to 10 years in prison, rather than the mandatory punishment of 25 years to life.

Kelly called the minimum "cruel and unusual punishment." But it sparked protests and calls nationwide for the judge to be removed.

A court of appeals overturned Kelly's ruling, ordering Rojano-Nieto to be re-sentenced to the mandatory term. Nieto's new public defender asked the judge to delay the sentencing.

"My hands are tied. I have not been given time that I need," said Melani Bartholomew, Orange County deputy public defender.

She wants a hearing to discuss "youthful factors," which can then be presented to the parole board when he's eligible in 25 years. The judge agreed to push the sentencing to give her time to collect more evidence.

"I'm going to give you an opportunity to present to the court what other factors you think you're entitled to present so they're available at the youthful offender parole hearing," Kelly said.

Lockhart said he is open to the parole board getting as much information as they can, including the "youthful factors."