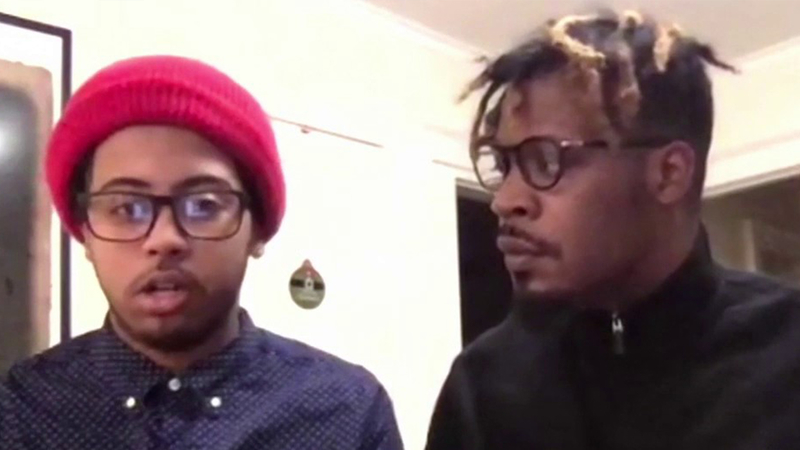 NEW YORK -- The family involved in a now-viral incident where a woman wrongly accused a Black 14-year-old boy of stealing a cellphone, spoke to Good Morning America about what happened.

"I've been confused," Keyon Harrold Jr. said. "I mean, don't know what would've happened if my dad wasn't there, honestly. These past few days, still kind of shell-shocked. But I'm hanging in there."

He appeared with his father -- Grammy-winning jazz musician Keyon Harrold -- his mom Kat Rodriguez and their attorney Ben Crump, who is calling for Manhattan District Attorney to bring charges against the woman.

Derick Waller reports on the 14-year-old speaking out about the incident.

The incident, which was recorded on cellphone video, happened in the lobby of the Arlo Hotel on Saturday, where the teen and his father were staying as guests. The unidentified woman repeatedly demanded he "give it back," apparently referencing her cellphone.

Watch the video that was posted on social media below:
EMBED More News Videos

Keyon Harrold, a jazz musician, says a woman falsely accused his son, who is Black, of stealing her iPhone in a New York City hotel.

The woman's cell phone was later found in an Uber.

"For me, I was confused because I've never seen that lady ever, and I didn't know what to do at the moment," Harrold Jr. said. "At first, I would like an apology. And two, I would ask her why she would do something like this to a kid who has never met you?"

The video has since gone viral and has prompted accusations of racial profiling.

Harrold Sr. said that physically, the woman "was all on him asking for his phone immediately" once they got down to the lobby.

"But after the video cuts off and, I mean, she basically tackled, she scratched me, and I was there to, you know, try to protect my little cub," he said. "And basically trying to keep her away, keep her off of my son. I couldn't imagine what it would have been like if I wasn't there to be with him."

He also said he was thrown off that the hotel representative was "basically siding with her" over his son.

"I just wouldn't stand for it," he said. "I'm still in shock. I'm still trying to try to believe, you know, that it happened to happen so quickly...It is just unbelievable that someone would literally have the audacity to assume and wrongly accuse."

Mayor Bill de Blasio also weighed in, saying of the incident, "This is racism. Plain and simple."

"It would be horrific at any age, but it's especially offensive that it happened to a child," he wrote on Twitter. "To Keyon Harrold Jr. and his family: I am so sorry this happened to you. Her behavior was an affront to our city's values."

This is racism. Plain and simple.

It would be horrific at any age, but it’s especially offensive that it happened to a child.

To Keyon Harrold Jr. and his family: I am so sorry this happened to you. Her behavior was an affront to our city’s values. https://t.co/xuWRyHTJmW

Harrold said his son is still shaken up over the incident.

Rodriguez, who was not present at the time, said she's still waiting to hear from the woman, who she wants to come forward and explain herself.

"Fear came in because my son, if his father wouldn't have been there, what would have happened to my son if the cops would have been called," she said. "When my son asked me, 'Why me, mom?' That just hurt.

The confrontation prompted comparisons to recent incidents involving false accusations against Black people. In May, a Black birdwatcher pulled out his phone in Central Park and captured a white woman calling police to report she was being threatened by "an African-American man."

Civil Rights attorney Ben Crump is calling on Manhattan DA Cy Vance to file charges against the woman in the video.

"We want charges because we have to send a message because this has larger society implications," he said. "Think about how many Black men have been falsely accused by these Karens and they end up losing their liberty and losing their life sitting in prison."

After viewing the video widely circulated on social media, police said they will now investigate the incident as at least misdemeanor assault. It is not being investigated as a bias incident at this time.

Police said Tuesday afternoon that she was positively identified and detectives are trying to locate her.

Hotel management said in a posting Sunday they reached out to Harrold and his son to apologize.

"We're deeply disheartened about the recent incident of baseless accusation, prejudice, and assault against an innocent guest of Arlo Hotel," they said on Facebook.