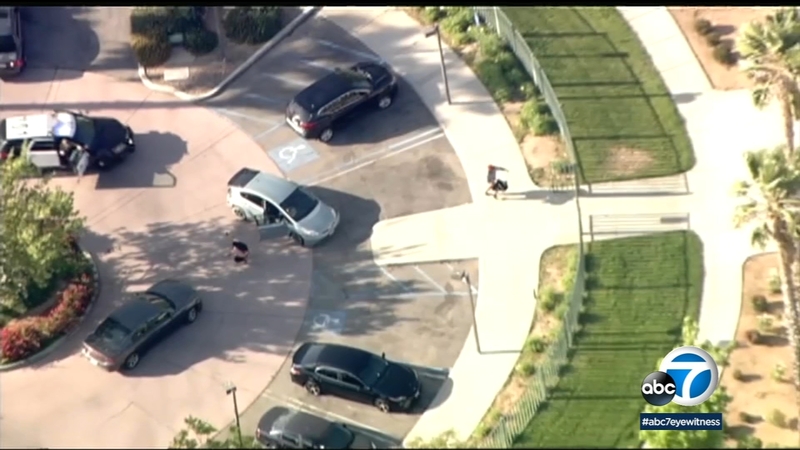 PALMDALE, Calif. (KABC) -- An armed kidnapping suspect was taken into custody following an hours-long standoff at a Palmdale apartment complex after the suspect led California Highway Patrol officers on a chase from Kern County through the Antelope Valley at high speeds Thursday.

The chase started in Kern County just after 5 p.m. The suspect in a Prius traveled at high speeds on the 14 Freeway into the Antelope Valley, at times hitting close to 100 mph.

At one point, the vehicle got off the freeway and headed into residential neighborhoods in Palmdale, continuing at high speeds on surface streets.

One officer collided with another vehicle during the pursuit.

A few minutes later, the suspect stopped at an apartment complex and two people exited the vehicle. It appeared the passenger was a woman who may have been the alleged kidnapping victim. Upon exiting the vehicle, she immediately held her hands up and got on the ground as deputies approached.

The suspect, carrying a bag in his hands, fled into the apartment complex.

An armed kidnapping suspect fled through the Antelope Valley then barricaded himself in a Palmdale apartment building.

Los Angeles County sheriff's deputies, who had taken over the pursuit, followed the suspect into the residential building amid reports he may have been armed with a sawed-off shotgun.

Officers surrounded the building - the Sierra View Gardens apartment complex on 20th St. E - and it appeared a barricade situation was developing.

As they worked to convince the suspect to surrender, the building's exterior sprinklers went off and deputies were working with building management to get them turned off. Eyewitness News later learned the suspect's mother lives in the building.

After about a half hour, a man climbed down from a second-floor balcony and surrendered to deputies. But it appeared that may not have been the suspect as his clothing was slightly different and deputies remained in a defensive posture outside the building.

The sheriff's Special Enforcement Bureau was on scene with an armored BearCat vehicle.

The suspect remained barricaded in the building for hours. The barricade situation concluded around 12:20 a.m. Friday with the suspect in custody, according to LASD.

Further details regarding how the standoff ended were not immediately available.