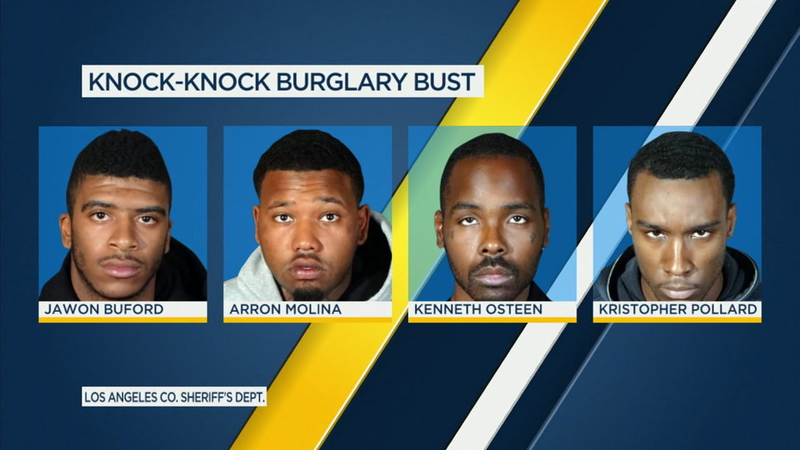 LOS ANGELES (KABC) -- Four men, who all have significant criminal histories, were arrested on suspicion of conducting a series of knock-knock burglaries all over Los Angeles County.

The suspects' Kia was found parked in the 500 block of Hanley Avenue in front of several homes, authorities said. Then they saw three suspects run out of a yard and into the Kia. Not long after, detectives were able to confirm a burglary had occurred as the Kia drove out of the neighborhood.

As the suspects left the area, the detectives and deputies coordinated with Los Angeles police in the area to do a traffic stop. When LAPD units were getting close, the suspect vehicle was stopped at Kenter Avenue near Tigertail Road.

The driver in the Kia then accelerated directly into an LAPD vehicle. Detectives, LAPD officers and a Simi Valley police detective were able to detain all four suspects.

All four suspects were arrested and booked at the L.A. County Sheriff's Department's West Hollywood station.

Authorities said the suspects and vehicle were subjects of an ongoing residential burglaries investigation, and they believe the group is likely connected to a series of knock-knock burglaries around the county.

In addition to the residential burglary charges for each suspect, authorities said Osteen was also arrested on suspicion of assault on a peace officer.

Prior to the arrest, each suspect had a lengthy criminal history, authorities said, which included previous residential burglaries, weapons violations and felony convictions.