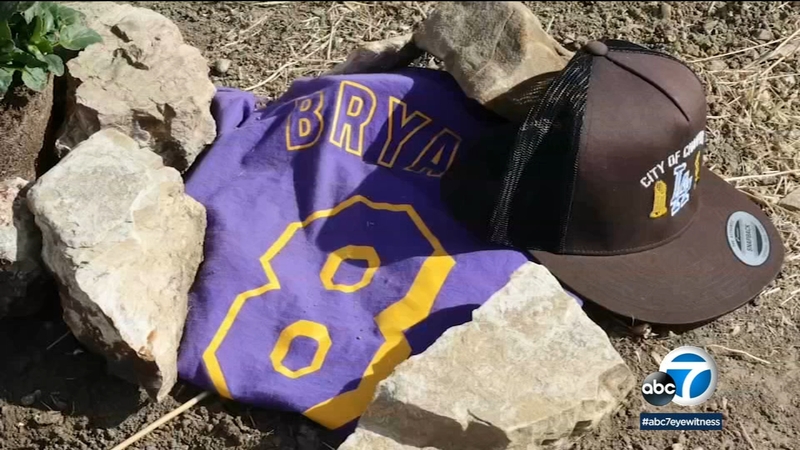 CALABASAS, Calif. (KABC) -- It is a breathtaking view from the top of the hill in Calabasas just off of Las Virgenes Road. Take the trail and you come to a memorial, the site of the helicopter crash that claimed the lives of Kobe Bryant, his daughter Gianna and seven others.

Using stones, someone laid out the numbers 8 and 24 for Kobe's jerseys.

On this anniversary, Paul Roberts wanted to visit.

"He died on my son's birthday. It's very meaningful to me," says Robert.

Just down the hill there is the Church In the Canyon. A year ago, Scott Daehlin was at the church and heard the helicopter approaching.

"It was very, very cloudy," he says. "It was clear down here but just about 150 to 175 feet up is where the helicopter was. Couldn't see a thing and it got closer and closer, and I was what the heck is this guy doing flying in this?"

Daehlin says he tried to find the helicopter in the sky but fog was too thick.

"From the time it was above us until the time of impact it was maybe 25 to 35 seconds. Then you just heard a thud and absolute silence," he says.

Holland Forrest was parked in the front of the church when it happened.

"Just at that second I saw this poof and I said that's weird. What I recall on that day was just the silence of the people that were here," says Forrest.

A year later up on the hill it is still usually very quiet. For people who come here to reflect on the loss they think of the legend and the legacy that Kobe left behind.