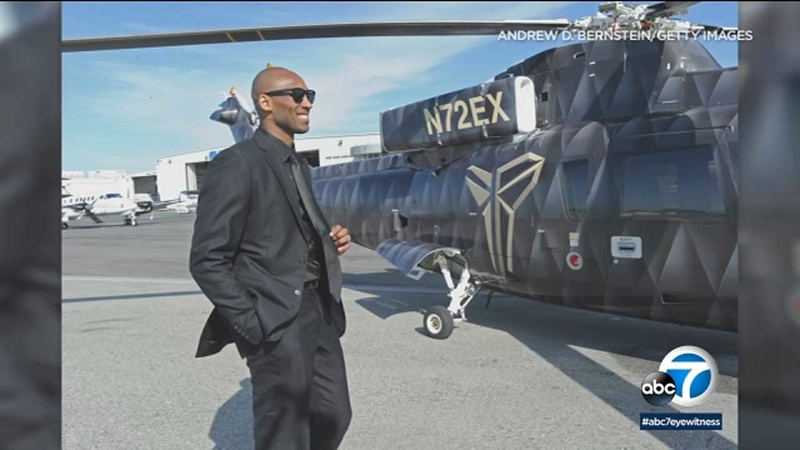 As an investigation continued Monday into the cause of the helicopter crash that killed Kobe Bryant, his 13-year-old daughter and seven others, a pilot who had formerly shuttled the NBA superstar between Orange County and Staples Center spoke with ABC7 about the weather conditions at the time of Sunday's disaster.

Kurt Deetz described the Sikorsky-76, which featured a white leather interior, as the equivalent of an airborne "limo" or "Cadillac Escalade."

Deetz showed ABC7 his log book, a record of the two years he spent flying Bryant in the airship.

The day after the crash, he said he was still in shock, especially given his familiarity with the helicopter, Bryant and his family, and the pilot who was flying it at the time.

He said he has declined to fly in dangerous weather conditions in the past, but added that he never had to do that with Bryant.

"He's not in the back yelling, 'You better get us there.' You have no contact with them," Deetz said, referring to passengers during a flight.

Deetz said the foggy conditions raise no alarms, adding that tracking over freeways is typical for pilots due to the high visibility of their wide lanes.

But according to flight data, Bryant's helicopter suddenly accelerated and descended. Among the possible scenarios is that the pilot found himself in the middle of a cloud and lost his bearings.

Deetz said he too is awaiting the National Transportation Safety Board's findings on the circumstances that the pilot was contending with just before the crash.

"Not seeing what he was seeing, I don't know why he reacted the way he did," he said.
Report a correction or typo
Related topics:
helicopterkobe bryanthelicopter crash
Copyright © 2021 KABC-TV. All Rights Reserved.
More Videos
From CNN Newsource affiliates
TOP STORIES