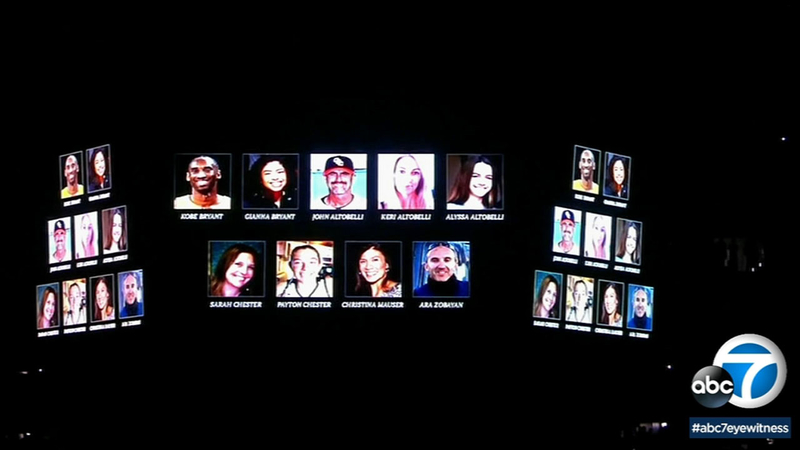 LOS ANGELES (KABC) -- Basketball returned to the Staples Center on Thursday for the first time since the death of Kobe Bryant, as the Los Angeles Clippers paid tribute to the late Lakers superstar.

The Clippers were facing the Sacramento Kings, coached by Luke Walton - a teammate of Bryant on the Lakers.

Before the game, the team played a video tribute to Bryant, who was killed in a helicopter crash along with his daughter Gianna and seven others on Sunday.

"Our city has suffered. Four days ago in Calabasas, nine lives were lost," the tribute said.

There was also a 24-second moment of silence, in honor of the No. 24 jersey Bryant wore for half of his career.

Clippers and Kings fans joined in showing respect to their onetime fierce rival.

"It doesn't matter if you like the Clippers, you like the Lakers or you like the Kings, we all cared about this person," said fan Shoshana Rand of West Hollywood.

Hundreds of fans gathered outside the arena at LA Live, as they have every night since Kobe's death, leaving candles, basketballs and other items of tribute.

Friday night, the Lakers have their first game since the tragedy, hosting the Portland Trail Blazers at Staples. There will be tributes before, during and after the game.

"We know it's going to be a tough game emotionally," Lakers Coach Frank Vogel said. "But I think we're all looking forward to getting back out there."

In the meantime, the investigation into the cause of the crash continues. The wreckage of the helicopter has been moved to a secure location in Phoenix and the National Transportation Safety Board says it could be more than a year before a likely cause is determined.